Sainsbury’s has suffered a fall in profitability during what chief executive Mike Coupe described as a “solid” first half.

The grocer’s statutory pre-tax profits dropped 40% to £132m in the 28 weeks to September 22, as it booked £170m of exceptional items – including £69m in retail restructuring costs and £17m relating to its proposed merger with big-four rival Asda. 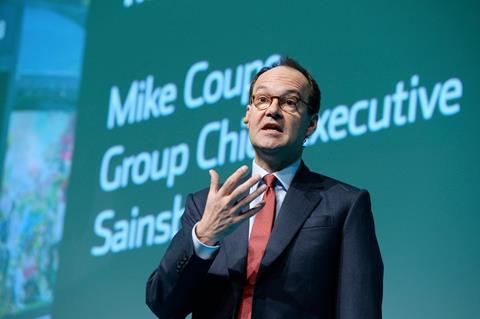 Underlying group sales including VAT rose 3.5% to £16.88bn during the period.

Sainsbury’s said sales in its core food business grew 1.2% across the half, driven by the summer heatwave.

Online grocery sales climbed 6.9%, while revenues raked in from its convenience stores advanced by more than 4.3%.

During the six-month period, Sainsbury’s “transformed” the way it operates its supermarkets, “fundamentally changing” how its shopfloor staff work.

The retailer said the “leaner” management structure in it stores had created “significant savings”, which it ploughed into giving staff a pay rise to £9.20 per hour.

Since the half-year end, Sainsbury’s has also hit its target to realise £160m of EBITDA synergies from Argos, nine months ahead of schedule.

Around £63m of those synergies were delivered during the half.

Sainsbury’s cautioned that “the consumer outlook is uncertain” heading into the crucial Christmas trading period, but insisted it remained “on track” to deliver underlying pre-tax profit of £634m for the full year.

“Our strategy of offering customers a distinctive range of high-quality and great-value food has driven like-for-like sales growth at Sainsbury’s. Where we have invested to lower prices, volumes and transactions have increased.”

On the proposed merger with Asda, which is currently being investigated by the Competition and Marlets Authority (CMA), Coupe added: “Our proposed combination with Asda will create a dynamic new player in UK retail, with the ability to further lower prices and to reduce the cost of living for millions of UK households.

“The CMA is conducting its in-depth phase two review into the proposed combination and we continue to engage constructively with the CMA and panel.”