John Lewis sales rose 14.5% to £74.9m in its 150th anniversary week despite the tube strike impacting footfall at its central London stores. 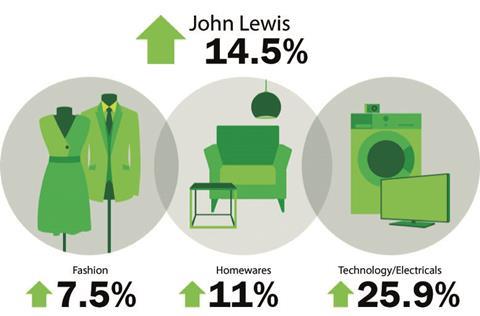 Online sales surged 33% in the week to May 3, with click-and-collect popular with customers, particularly picking up items at local Waitrose stores.

Store sales jumped 8% over the week despite the tube strike taking its toll on both Oxford Street and Peter Jones, where sales slipped 3.5% and 5.8% respectively.

The department store group’s ‘at home’ format was once again the star performer with the Chichester, Swindon and Croydon stores all trading strongly.

Home sales rose 11% over the week with its 150 year anniversary merchandise is in demand. However, it was furniture that had the greatest impact and the retailer said it had a “healthy level of forward orders”.

Russell said: “The anniversary celebrations around the country were very well received, particularly in Oxford Street. The roof garden proved to be an instant hit and the exhibition a ‘must see’ according to customers. Congratulations to all Partners involved in pulling together such a compelling celebration with as much, if not more, rigour as at Christmas! Happy Birthday!”

Meanwhile, at John Lewis Partnership-owned Waitrose the sunshine helped sales to sizzle, up 6.4% over the week to £126.9m.

Barbecue foods were up 81% and barbecue fuel up 74% despite the same week last year being warmer.

Beef sales rose 13% year on year, sausage sales were up almost 11% and poultry increased by 8%.

Jones said: “Roast dinners seem to remain the cornerstone of bank holiday get-togethers for friends and family as sales of frozen Yorkshire puddings rose by 15%, frozen potatoes sales grew by 21% and frozen vegetable sales increased by 13%.”

Waitrose’s Welcome Break motorways service stations delivered “incredible figures” ahead of the Bank Holiday. Jones said that in the first quarter like for like rocketed 23% while total sales soared 54%.