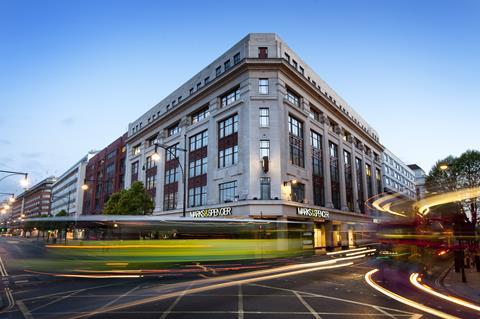 “Ahead of today’s Q3 update from M&S (for the 13 weeks to Dec 27), the consensus was that food would be up 1%/2% like-for-like and that general merchandise would be down 3%%, with the much-vaunted gross margin increase coming in at the bottom end of the range.

“However, the nea- 6% fall in M&S general merchandise like-for-like sales in the Xmas quarter is fairly disastrous, not helped by the online weakness and warehouse problems, whilst the flat like-for-like sales in M&S Food is disappointing. But the damage to the M&S gross margin is not as bad as feared (because they were discounting a bit less than the year before?) and cost-cutting has saved M&S from a profit warning. Plenty there for management to be defensive about on the 9am conference call with analysts, as the long-term decline of M&S continues.”

“Although we believe that at last there have been some visible improvements and more consistency with the womenswear ranges, we still have a number of concerns. The initiatives relating to the supply chain and IT address under-investment from the past and bring the infrastructure up to the standards of international peers, but will not, we believe, lead to a significant increase in sales or profits over the medium term. Debt levels remain over £2bn and the company has a pension deficit to fund, which will likely limit the potential for accelerated dividend payouts.”

“A materially weaker than expected Q3 sales performance does not put M&S in the Christmas winners’ camp and given the continuous underperformance of general merchandise we see little reason to change our negative stance on the name.

“Whilst we acknowledge the unseasonal weather and website disruption that resulted in general merchandise like-for-likes down 5.8%, M&S’s sales were considerably below the growth reported by Next, House of Fraser and John Lewis over Christmas. M&S will need to show an improved performance over the upcoming spring/summer season to regain investors’ confidence, we believe.

“Management has recently changed its narrative to focus more on the gross margin, with guidance for the FY maintained at +150 to +200bps which will likely provide support in the near term. Additionally today’s FY opex guidance improvement by 1.5% to +2% will likely offset the pressure on FY PBT estimates coming from worse sales but the latter will likely continue to be reason for long-term concern on the name.

“Our longer-term negative view on M&S is driven by continuing market share losses in GM, which we do not see abating any time soon, and the poor incremental returns on capex M&S has been making for years. We reiterate our underweight stance on the name and price target of 350p.”

“The improved margin on clothes is a sound long-term aim, but Marks remains a volume retailer and not a boutique. It simply cannot allow sales to fall at the current rate. A 5.3% like-for-like fall in clothing sales is woeful compared to the success of its high street rivals, and unforgivable given the length of time it has been working on a turnaround strategy.”