Selfridges has unveiled a record Christmas performance, highlighting the polarised fortunes of department stores over the peak trading period.

Selfridges generated a 10% sales uplift in the 24 days to Christmas.

All of the retailer’s stores – it has two in Manchester and one in Birmingham as well as the Oxford Street flagship – notched up revenue rises.

In the final week, sales growth reached 15% and footfall at Oxford Street was up 6%, helped by the opening of the second phase of a new accessories hall.

Managing director Anne Pitcher said Selfridges achieved a “full-price Christmas”, despite widespread discounting by other retailers during the golden quarter.

“Black Friday was not part of the numbers and didn’t take the strength out of our numbers,” she said.

Selfridges’ strong showing was in contrast to the fortunes of some other department store specialists.

Debenhams warned on profits in early January after being forced to resort to promotions, while House of Fraser suffered a sales slide online and in-store.

As department store groups such as Debenhams battle to reinvent themselves by increasingly focusing on experience, Selfridges has since its establishment positioned itself as “more than a shop”. 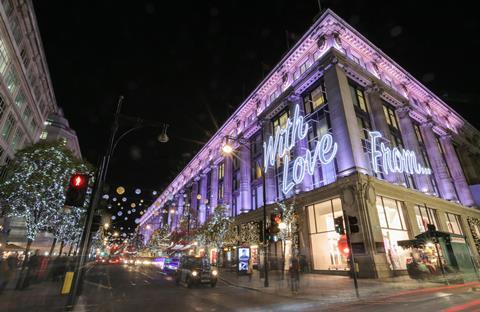 Selfridges positioned itself as at the heart of communities over Christmas

Pitcher said Selfridges is “a public space” that engages people in all sorts of ways as well as shopping.

Applying a term originally used by founder Harry Gordon Selfridge, she said: “We have to think of it as a social centre. It goes beyond retail theatre and retail experience – Selfridges is a community where people come and feel special.”

Through its ‘With love from…’ Christmas campaign, Selfridges positioned itself as at the heart of communities in the cities where it trades.

The retailer worked with local artisan-style businesses such as gin-makers in Birmingham and Manchester to make the most of a sense of place.

It also created a sense of enjoyment and occasion with events such as pantos and community choirs that drew crowds who deserted some retailers after Black Friday.

Pitcher said: “At the beginning of December we were aware that people were just coming off Black Friday so we had things like confetti cannon showers.

“People came to enjoy it – it’s your Instagram moment and that further embeds the desire to be a social space.”

Stores generate the bulk of Selfridges’ sales and there will be continued investment in them this year including £20m apiece in Birmingham and Manchester.

In Oxford Street, a new Duke Street entrance will open in March, leading straight into the accessories hall.

“The digital channel should be totally reflective of what we do in-store. We’re not there yet, but with the two knitted together there are larger opportunities”

The retailer will also continue to develop its website. “We are mostly a store that appeals to the UK,” says pitcher. “The opportunity that digital provides to be more international is clear.”

But she observed: “The digital channel should be totally reflective of what we do in-store. We’re not there yet, but with the two knitted together there are larger opportunities.”

However, she is quietly confident about Selfridges’ continued success. She said: “We have lots of investment and activity coming through. There will be new ideas, products and collaboration. It might be tough, but we’ve got exciting stories to share.”