A ‘dead heat’ has been called between Tesco and Sainsbury’s by Kantar Worldpanel after releasing data which showed the archrivals recorded identical growth rates over Christmas. 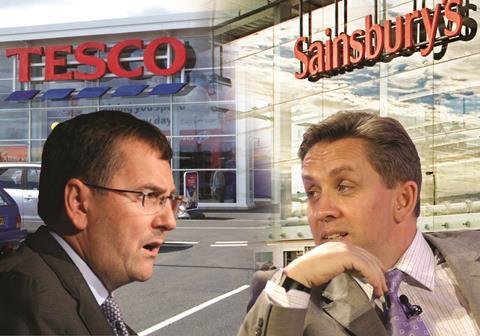 Kantar said the small Asda share dip from 17.9% to 17.7% represents a “bedding-in” of the Netto acquisition.

Kantar Worldpanel director Edward Garner said: “These festive trading figures show a dead heat between Tesco and Sainsbury’s in the battle for Christmas. Both posted identical growth rates of 3.9% – just ahead of the total market – and market shares unchanged from a year ago.

“This represents a clear improvement in Tesco’s fortunes following a series of share dips in 2012 but it is also a strong performance from Sainsbury’s which had been predicted to suffer disproportionately from the Tesco fight-back by some commentators.”

Sainsbury’s chief executive Justin King said the grocer was the “Christmas winner” in the run-up to the big day. Tesco has reported the strongest like-for-like figure of the grocers which have already reported their Christmas trading figures however the trading periods were not identical.

Garner added: “Waitrose’s strong performance over the seasonal period is reflected in its 8.6% growth rate, which is over twice the market average. Although this six week report is, strictly speaking, not comparable with our usual 12-week series it is worth noting that the Waitrose share is higher than any previous share we have reported for the retailer.