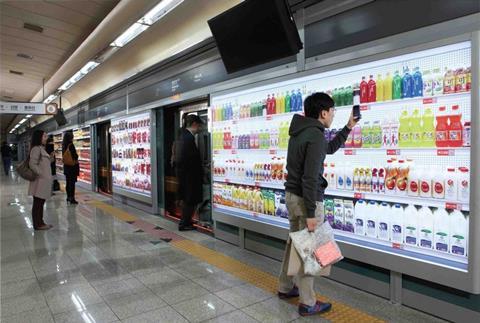 The film revealed how the walls would work in subway stations in Korea, featuring images of a virtual shop with shelves stacked full of products and showing technology developed by Tesco, which allows shoppers to order direct using smartphones to take photos of products.

Although the technology has been developed, Tesco has not yet launched the service but is considering whether to - if it does, it could be introduced in the UK at locations such as tube stations.

A Tesco spokesman said: “We are always looking at innovation.” He would not commit to putting the idea into practice but said: “We are excited about it and hopefully it will come to London.”

Martin Newman, chief executive of online retail consultancy Practicology, said: “From a technical point of view, it wouldn’t currently work in the London underground as it doesn’t have mobile phone reception, but that is something TfL is looking into.

“As a customer engagement tool though, it is very neat. It is a clever proposition. Customers could even order in the morning on the way to work and have it delivered by that evening.”