The Co-operative has returned to sales growth in its grocery arm after four successive months of decline. 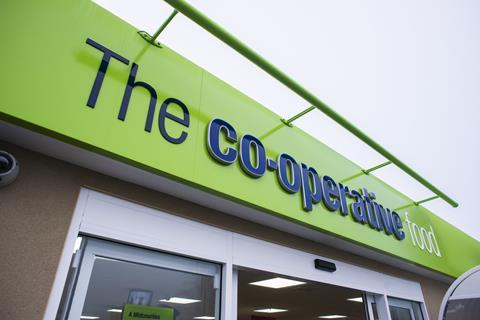 The UK’s fifth largest grocer’s sales edged up 0.2% year-on-year in the 12 weeks to July 7, according to Kantar Worldpanel data.

Under new group chief executive Euan Sutherland the mutual is looking to improve its service and in-store offer in its food stores and plug a hole in its finances in its banking arm. It now holds a grocery market share of 6.4%, down from 6.6% last month.

Sainsbury’s share was flat at 16.5%, and it was the only grocer of the big four not to lose ground. The grocer grew sales 3.8% in the period.

Elsewhere, Aldi, Lidl and Waitrose continued to perform strongly at either end of the market and the three now account for 11.5% of the grocery market, 3.2 percentage points more than they did this time four years ago.

Kantar Worldpanel director Edward Garner said: “Waitrose, Aldi and Lidl have all been hugely successful in recent years, growing well ahead of the market average. Together, these retailers now account for 11.5% of the grocery market, 3.2 percentage points more than they did this time four years ago. This trend has cut deeply into the available market share for the bigger retailers who are now having to compete for a contracting middle ground.

“The latest price matching promotions from retailers have reduced the amount consumers are shopping around, with many people feeling that they can get the same prices at different retailers.”

He added: “As a result we are seeing an increased focus on quality. Both Tesco Finest and Sainsbury’s ‘Taste the Difference’ ranges are now growing strongly and Aldi’s ‘Like Brands only Cheaper’ campaign and Lidl’s ‘Taste Test’ are positioning their private products as direct competitors to major brands.”