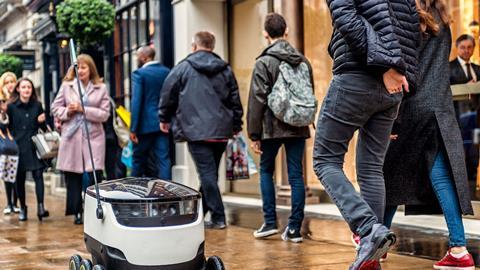 The impact of automation on people power

Hermes HR director Jill Maples discusses the importance of people to the home-delivery sector despite the rise of the robot.

Earlier this month we welcomed BBC Radio 4 to our new £31m flagship hub in Rugby, where presenter Mark Mardell toured the facility and interviewed some members of our team.

The visit was part of a series the radio station has been running regarding the impact of automation across multiple sectors, including construction, retail and, of course, the logistics and home-delivery industry.

Mark was keen to see first hand the scale of the operation in Rugby, which officially opened earlier this year and is the biggest of its kind in the UK.

In total, the hub measures 270,000 sq ft, the equivalent of 34 football pitches, and has the capability to efficiently process in excess of 1 million parcels each day.

As a result, our overall parcel processing capacity has been increased by 45%, while we also have the option to add a third sortation tier within the hub, which would increase daily capacity by a further 500,000 parcels.

Recently, there have been reports regarding how the rise of automation could impact jobs.

For instance, last month the Telegraph published research from Mace that predicted 600,000 of the current 2.2 million positions in construction could be automated by 2040.

The study added that bricklaying could be hit hard, with numbers being reduced from 73,000 to just 4,300 people.

Therefore, it wasn’t surprising when Mark asked if automation could impact jobs across the home-delivery sector.

Despite investing heavily in state-of-the-art sorter systems, we were proud to tell him that people play, and will continue to play, a significant role within our hubs.

For instance, we created 100 new jobs when we cut the ribbon at Rugby and we continue to support the local economy by creating further positions during periods of intense activity.

While we have many dedicated employees carefully loading and unloading trailers, we also have countless experts carefully carrying out a variety of roles on site, from planning and forecasting through to overseeing the efficient running of all the machinery – and many more in between.

Of course, the development of new technology continues to create new opportunities, which we are keen to explore.

For instance, you may be aware that we are working alongside Starship Technologies to trial self-driving delivery robots in London.

However, unlike the recent reports regarding the bricklayers losing out to a robot equivalent, we only see these robots supplementing the valuable delivery services provided by our network of self-employed couriers each day.

Our ongoing growth and success is down to the fact that we are a people-focused organisation – and long may that continue, even with the rise of the robot.