Sports Direct tycoon Mike Ashley has been condemned by MPs over working practices at the retailer.

The Business, Innovation and Skills Committee, chaired by Iain Wright, found that “the way the business model at Sports Direct is operated, in both the warehouse and in the shops across the country, involves treating workers as commodities rather than as human beings with rights, responsibilities and aspirations.”

After investigating employment conditions at Sports Direct’s Shirebrook warehouse and shops, the parliamentarians said: “What the spotlight revealed was extremely disturbing. Workers at Sports Direct were not being paid the national minimum wage, and were being penalised for matters such as taking a short break to drink water and for taking time off work when ill.

“Serious health and safety breaches also seem to have occurred. For this to occur in the UK in 2016 is a serious indictment of the management at Sports Direct.”

They welcomed Ashley’s eventual engagement with the inquiry, and some signs of change, but concluded: “He must be held accountable for some appalling working practices at both the Sports Direct shops and warehouses, either for not knowing about them, or for turning a blind eye to such practices in the interests of maximising revenue.”

The inquiry focused on aspects frequently managed by employment agencies Transline and The Best Connection including terms and conditions, the notorious ‘six strikes and you’re out’ policy which made staff frightened to take time of work, and deductions from wages.

After resisting appearing before the committee, Ashley attended a hearing in June. 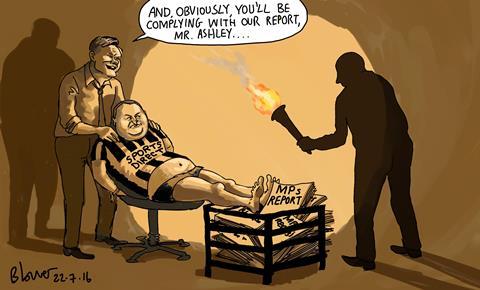 “We will be holding Mr Ashley’s feet to the fire, so as to see what progress he has made on improving working conditions for workers on his premises.”

He acknowledged then that the retailer had fallen short of acceptable standards and by that point had already launched his own review into working practices.

The MPs said his appearance “has resulted in welcome commitments by Mr Ashley to achieve real change”.

However they warned: “We will be holding Mr Ashley’s feet to the fire, so as to see what progress he has made on improving working conditions for workers on his premises.”

A Sports Direct spokesman said: “We will study the contents of the committee’s report very carefully. It is our policy to treat all our people with dignity and respect. We are pleased to see that the committee has recognised Mike Ashley’s commitment to engage in addressing any shortcomings in the working practices at Sports Direct.”

Although the volume and seriousness of concerns about Sports Direct probably makes it unique, there are implications for retail generally from the MPs’ findings, which will form part of “broader inquiries into the future labour market”.

They report states: “Although Sports Direct is a particularly bad example of a business that exploits its workers in order to maximise its profits, it is unlikely that it is the only organisation that operates in such a way.”

“Although Sports Direct is a particularly bad example of a business that exploits its workers, it is unlikely that it is the only organisation that operates in such a way.”

That message will no doubt prompt other retailers to review their own practices to avoid the problems and resulting headlines that have tarnished the reputation of Sports Direct and undermined, to a degree, its commercial performance.

There are three areas to consider: governance, use of employment agencies and business models.

Standards of governance at Sports Direct, such as whether chairman Keith Hellawell has the experience and will to challenge Ashley, have been questioned in the past.

The MPs believe that poor governance was at the heart of what went wrong at the retailer.

“Corporate governance is there to ensure that in running companies, boards balance the interests of the many different stakeholders, including the employees and workers,” the report states.

“In a well-run company, widespread evidence of poor working practices would be detected at an early stage, reported to the board and properly addressed. This did not happen.

“We recommend that Mr Ashley should complement his working practices review with an independent review of his corporate governance arrangements.

“We believe that such a review would improve the running, and hence performance of his company, as well improving the reputation of Sports Direct amongst stakeholders and investors.”

The question other retailers should ask is whether their standards of governance are all they should be.

Use of employment agencies

Sports Direct did not directly employ staff at Shirebrook but brought in Transline and The Best Connection at a cost of £50m a year to employ workers at Shirebrook. The two agencies evidence was described as “woefully poor”.

The report said: “For Sports Direct to pay agencies that do not seem to have a basic understanding of employment law and practices seems irresponsible, if not reckless”.

Transline was accused of misleading the MPs and has been asked to urgently clarify its evidence.

“For Sports Direct to pay agencies that do not seem to have a basic understanding of employment law and practices seems irresponsible, if not reckless”

The Gangmasters Licensing Authority (GLA), originally established to protect workers in industries such as food processing and agriculture, will from October this year have its remit extended to address labour abuse in all markets, including retail. The Committee recommended that the GLA considers investigating Sports Direct’s employment practices at the warehouse and stores.

Any retailer that uses employment agencies should ensure that they are complying with the letter and spirit of the law.

The Committee maintained that Sports Direct’s value retail model was in part responsible for the abuses uncovered, because methods such as zero hours contracts were central to keeping prices low for shoppers.

The MPs said: “The way the business model at Sports Direct is operated, in both the warehouse at Shirebrook and in the shops across the country, involves treating workers as commodities rather than as human beings with rights, responsibilities and aspirations.

“The low-cost products for customers, and the profits generated for the shareholders, come at the cost of maintaining contractual terms and working conditions which fall way below acceptable standards in a modern, civilised economy.

“There is a risk that this model—which has proved successful for Mr Ashley—will become the norm. We will be considering the full implications of this business model in the context of our broader inquiry into the labour market.”

Other value retailers should be prepared for increased scrutiny of their business models.