Tesco has unveiled the details of its new Love Every Mouthful advertising campaign as it looks to revive its fresh food image as supermarkets compete fiercely on quality rather than just price. 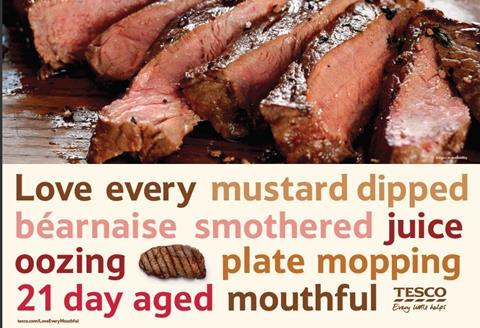 Tesco’s Love Every Mouthful campaign kicks off on TV on Sunday and will be followed by cinema, outdoor, social media and print advertising the following day, as revealed by Retail-week.com on Tuesday.

Fresh is becoming a battleground for supermarkets as customers are increasingly more confident they are getting good value following a sustained period of price matching, and the focus has now shifted to quality.

Kantar Worldpanel director Ed Garner said: “The latest price matching promotions from retailers have reduced the amount consumers are shopping around. As a result we are seeing an increased focus on quality.”

Tesco’s campaign comes just months after the horse meat scandal, which embroiled supermarket groups including Tesco, Asda and Aldi and raised doubts over food provenance. However, it is understood the new campaign was planned before the horse meat issue surfaced.

The UK’s largest retailer canvassed its staff, asking for their favourite foods and recipes to inform the campaign, and some staff feature in the ads alongside suppliers. It was created by agency W+K.

Tesco UK marketing director David Wood said: “So much care goes into the food we eat, from growing to picking, to choosing, to packing and tasting. We want to share our passion for food. The idea behind Love Every Mouthful is simple – a reminder in our busy lives to savour every flavour, every scoop, every crunch, every drizzle, every mealtime conversation. Our approach is playful and we hope people will enjoy it.”

Tesco boss Philip Clarke has put fresh food at the heart of his strategy to improve its core UK business after statutory pre-tax profits fell 51% to £1.96bn last year. Data released by Kantar Worldpanel this week revealed that Tesco’s grocery market share fell from 30.7% to 30.1% in the 12 weeks to July 7.

Morrisons has also put fresh at the core of its strategy and is running a fresh product price promotion called Pick of the Street, while Sainsbury’s is highlighting online that its fresh pork and chicken are 100% British.  Asda has been slashing the price of fresh food to prevent its shoppers flocking to Aldi stores for supplementary shops.