Tesco stemmed its sales declines in February as a “renewed focus on price promotions” helped the grocer keep hold of more customers. 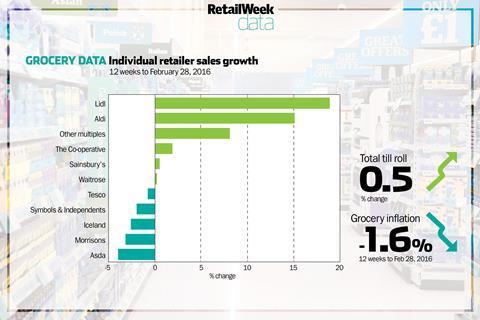 The supermarket giant’s sales decreased 0.8% last month – a marked improvement on the 1.6% decline registered in January – as its market share dipped to 28.4% from 28.7% a year ago.

But Sainsbury’s was again the star performer among the big four as sales advanced 0.5%, marking the retailer’s eighth consecutive month of growth. According to Kantar Worldpanel’s latest grocery market share data, that is the longest run of sales growth by a big-four grocer since March 2013.

The grocer was boosted by “strong” online sales and continued growth of its Sainsbury’s Local convenience business, but its market share remained flat year-on-year at 16.8%.

Walmart-owned Asda was once again the worst-performing member of the big four, posting a 4% decline in sales for the 12 weeks to February 28. That drove its market share down from 17% last year to 16.2%.

Morrisons also registered a 3.2% fall in sales as its market share dropped from 11% to 10.6% on the year – a figure that continues to be hit by the sale of its M Local c-store chain.

The Co-op, which became the fastest-growing grocery retailer aside from the discounters in January, continued its momentum, notching a 1.9% sales increase in February driven by an uplift in shopper frequency.

Discount duo Aldi and Lidl also continued to grow their respective shares of the market. Lidl again outpaced its closest rival, as sales surged 18.9% in February to take its market share to 4.2%.

Kantar Worldpanel’s data revealed that overall supermarket sales were up 0.5% during the 12 weeks compared to a year ago – the fastest rate of growth since last October – as Valentine’s Day boosted sales in certain categories.

Fraser McKevitt, head of retail and consumer insight at Kantar Worldpanel, said: “Despite prices continuing to decline, the combination of Valentine’s Day, and consumers stocking up for an early Easter has boosted certain categories.

“February chocolate sales are up by 13%, cut flowers have increased by 7%, and sparkling wine sales are up by 15%. New Year resolutions to eat more healthily don’t seem to have been forgotten, helping fruit and vegetable revenues to grow by 4% despite like-for-like produce prices falling.”

Separate data from Nielsen supported Kantar’s notion that Tesco was stemming the tide of shoppers deserting it in favour of discount competitors, and suggested the grocer was also wooing back more shoppers.

Mike Watkins, UK head of retailer and business insight at Nielsen said: “Tesco’s turnaround continues. Building on the sometimes overlooked fact that three in four households shop there, Tesco has been improving the basics, including its pricing.

“This has encouraged more visits and attracted back shoppers who’d previously defected.”

Sainsbury’s was again found to be the top performer among the big four, although its sales were flat, while Asda and Morrisons posted declines of 5% and 3% respectively during the period.

Unlike Kantar’s data, Nielsen suggested that Aldi was the fastest growing discounter after growing sales by 17.1% during the period to take its market share to 6.6%.