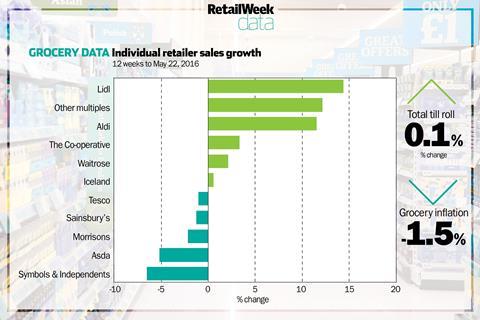 At rival Sainsbury’s, sales dropped 1.2% to £4.14bn, as it moved its emphasis from multi-price deals to “straightforward price cuts”, Kantar said.

The Co-operative continued its strong run, posting a sales rise of 3.3% for the second period in a row, bringing its market share to 6.2%.

“94% of Aldi and Lidl shoppers still visit at least one of the four major retailers every four weeks.”

Total shopper numbers at the big four fell 0.2% in the quarter.

“What’s clear is that consumers aren’t flocking away from their stores,” said Edward Garner, director at Kantar Worldpanel.

“In fact, 94% of Aldi and Lidl shoppers still visit at least one of the four major retailers every four weeks.”

But he added: “Consumers’ spend is increasingly being shared with other growing outlets which also include Waitrose, the Co-operative and Iceland and average household spend for the big four has dropped by 2.9%.”

Lidl and Aldi remain the fastest growing grocers, as their sales in the quarter jumped by 14.2% and 11.4% respectively.

The grocery market remains essentially flat with value growth of 0.1%, as food price deflation is still 1.5%.