Analysis: Why is Dixons Carphone charging ahead in electricals?

While competitors have struggled, electricals giant Dixons Carphone is thriving. Retail Week finds out why. 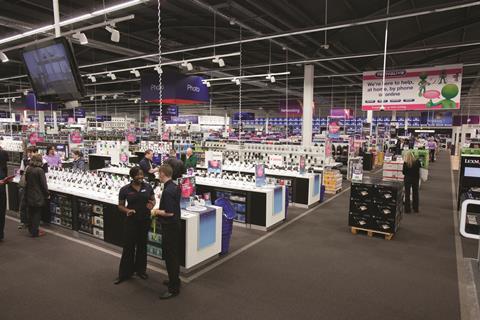 Dixons Carphone is basking in the glory of bumper sales that exceeded analysts’ expectations. But its sales boost – and more important the likelihood of profits coming in ahead of expectations – cannot simply be attributed to a rebounding UK electricals market. Rivals Argos and John Lewis have recorded a decline in electricals sales for their years to date.

Dixons Carphone has benefited from the collapse of Phones 4U, but even when Carphone Warehouse’s growth is stripped out of the performance, the rest of the business – Currys and PC World – still outperforms Argos and John Lewis.

Dixons Carphone reported like-for-like sales growth of 13% in the UK for its fourth quarter. Barclays analyst Christodoulos Chaviaras believes that when Carphone Warehouse is taken out of the equation the rest of the business recorded “high single-digit” growth.

Ahead of the pack

So why is Dixons Carphone hitting its stride while other multichannel retailers struggle? Chaviaras believes Dixons Carphone’s success can be attributed to a number of factors.

Television sales across the market have been sluggish for years following the poor sales performance of 3D TVs. But they are now picking up and Dixons Carphone is reaping the rewards.

“The last time we had a good product cycle on TVs was in 2006 and that was high-definition TVs. After that 3D TVs were a failure and now you have 4K HD televisions. Since the end of last year this product category has been in a material rise,” says Chaviaras.

Following the retailer’s fourth-quarter update, Dixons Carphone chief financial officer Humphrey Singer cited 4K as a big driver of sales. He said Dixons Carphone was in “a really strong technology cycle and we have seen continued growth in the ultra-high-definition top-end [4K] televisions”.

Chaviaras says Argos is missing out on benefiting from the rise of 4K because its business model is not set up to capitalise on it.

“Argos is never the introducer of technology and at present they are missing out on a positive TV product cycle,” he explains. “Argos does not sell large-screen TVs, one of the few product categories that is growing robustly at the moment. Own-brand TVs [Argos owns the Bush brand], a large part of Argos’s TV offering, are in decline. Argos sells a product that does not work at the moment. Its sales will likely improve when large-screen televisions get commodified.”

While Dixons Carphone is winning the television battle with Argos, it also appears to be making gains against John Lewis. It has managed to neutralise some of John Lewis’s threat by extending its free warranty proposition to high-value products.

Speaking at the retailer’s half-year results in December, Dixons Carphone chief executive Sebastian James said: “We know John Lewis has had free warranty for a mwhile and we think it is important we offer mfree warranty for all the top-end TVs and washing machines.”

The extension of the free warranty builds on the work started by former Dixons boss John Browett, whose focus on service enabled the retailer to compete with John Lewis.

Customer service has made Dixons Carphone the darling of manufacturers and given it an edge over pure-plays because of its knowledgeable staff who can explain products and up-sell to customers in-store.

It is understood suppliers such as Samsung have realised that by selling their products to pure-plays they are eroding their margins.

Dixons Carphone has a reputation for maintaining the RRP set by suppliers for longer, while Amazon lowers prices earlier.

That eventually leads to suppliers paying the cost because they can no longer make the margins they need. That can have huge implications for manufacturers because it eats into their research and development budgets and stymies further product innovation.

Dixons Carphone says it has a strong collaborative relationship with suppliers, which means everyone wins during a big promotional event such as Black Friday.

Even with Amazon’s aggressive pricing, over the years Dixons Carphone has managed to reduce its prices so it is almost at price parity with the ecommerce giant.

That is important because as white goods specialist Ao.com’s boss John Roberts has highlighted on numerous occasions, the electricals sector is the most transparent in retail when it comes to pricing.

It takes a shopper a matter of seconds to search on their phone to discover if an electricals product is cheaper elsewhere.

“It is a staggering comparison to think that back in 2009 Dixons Carphone was more than 20% more expensive than Amazon and now you will struggle to see any price differential,” Chaviaras points out.

Analysis of pricing of major electricals products by Chaviaras has found the price differential between Dixons Carphone and Amazon is around 1%.

The merger has also helped Dixons Carphone accelerate away from rivals. Its stores-within-stores format has proved a hit with customers and is generating incremental sales.

Dixons Carphone has opened 233 Carphone Warehouse stores in Currys PC World branches and is opening new concessions at a rate of about four a week.

The retailer told analysts that these stores-within-stores alone are responsible for two percentage points of growth.

Overall the picture looks rosy for Dixons Carphone. The retailer is not standing still and is seeking to extend beyond its core retail offering. That has included the launch of its own mobile network, iD, and it wants its Connected World Services (CWS) business to become a cash cow.

Cantor Fitzgerald analyst Mike Dennis believes that while CWS only accounts for 2% of group sales he expects “good growth in 2015” and an improvement in gross margin.

Dixons Carphone has placed a lot of faith in CWS and it would take a brave person to  bet against its success, given the business’s track record.

“Carphone Warehouse has a history of creating value out of things that at first glance don’t seem to have much,” says Chaviaras. “One of the most amazing examples is its collaboration with Best Buy to develop Best Buy Mobile, where it put in a few million pounds and after four years reaped £838m.”

It looks as if in the short term there will be no let-up for Dixons Carphone’s rivals. James intends to invest in new initiatives  such as more delivery options “when the  sun is shining” as he seeks to build on market share gains.

The momentum is certainly behind Dixons Carphone at present. However, the history of retail shows that momentum can swing to another retailer swiftly.

But James and his team will be determined not just to make hay while the sun shines but also prepare the roof for any rainy days.