Tesco eases shopping stress with ’relaxed lane’ and retail inspiration comes all the way from Hollywood.

Tourist hot-spot Hollywood is renowned for celebrities and movie-making.

But one adventurer, Retail Week’s Isobel Chillman, found inspiration instead in its retail scene.

Chillman stumbled across the Iliad Bookshop in North Hollywood, and was struck by its “rad” shop front.

Iliad, which stocks over 125,000 used books, specialises in literature and the arts, and sells rare books too. 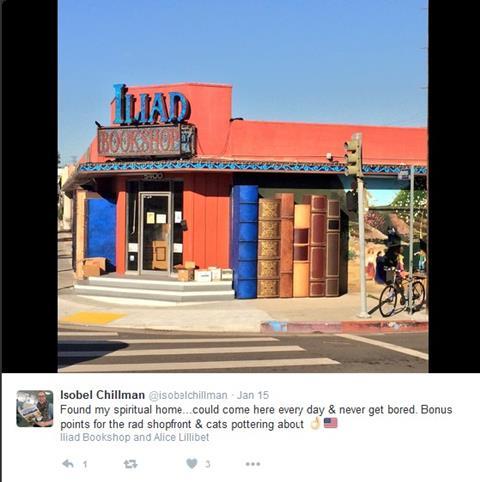 The Iliad bookshop had a unique shop front

Following in the footsteps of grocery rival Asda, a Tesco store in Scotland has introduced a “relaxed lane”.

The idea is to create a less stressful checkout line for less able customers.

Staff at the Forres Tesco store, in conjunction with Alzheimer Scotland, will be trained to identify special needs customers and operate at a more suitable speed.

The relaxed lane is currently available on Tuesday and Wednesday mornings.

A number of retailers have been piloting similar schemes, including Toys R Us, which rolled out autism-friendly shopping across its stores.

Jeventus football club – currently at the top of its Italian league – has unveiled a new logo.

And, as bookie Paddy Power cheekily pointed out on Twitter, its new branding strongly resembles that of JD Sports.

The sports apparel retailer has knocked rival Sports Direct off its top spot of late.

Perhaps Juventus hoped the simplified black and white look would give the team a kick.