New Look has thrown down the gauntlet to Asos and Next and said it wants to topple its rivals to become the number one multichannel fashion retailer within three years. 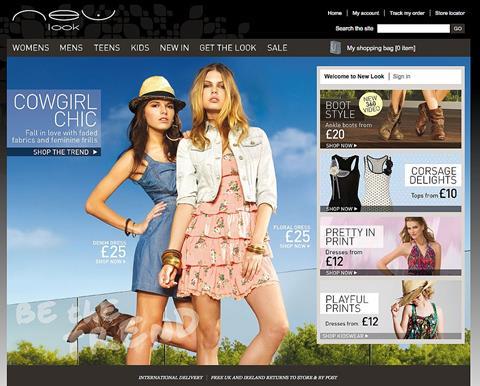 The fashion retailer last week launched its second-generation website with a raft of new features, which ecommerce director Dom McBrien said puts it head to head with market leaders.

The move comes as the New Look board met on Tuesday to consider if market conditions had improved sufficiently to resurrect its £1.7bn flotation plans. It is understood the retailer’s position remains the same as when it postponed its flotation, that it would re-evaluate its options when market conditions improve.

McBrien said that New Look has moved from sixth place in online research company Hitwise’s rankings to third over the 10 months, behind etailer Asos and multichannel giant Next.

He said the new website, plus its 1,000-store global network, will allow New Look to leap to top of the rankings.

McBrien said: “Next has had 20 years of its catalogue and has its heritage and its database, but we have a lot of new features on this site. Asos does not have stores. We can multichannel and they can’t.”

Both Next and Asos carry brands as well as own-brand though, which differs from New Look’s offer.

New Look, which has made clear its ambitions to become a key global fashion retailer on a par with giants Inditex and H&M, relaunched its site featuring the refreshed store livery of black and silver.

The site uses lifestyle photography, simpler navigation and click through, and 360-degree viewing of product. Shoppers can also recreate their favourite celebrity’s look.

The site operates in 24 markets and 5% of online sales, which remain undisclosed, come from overseas. McBrien wants to grow this to 10%, which would be more than £100m in the long term, he said.

This year the retailer will roll out an ATG platform, which is also being adopted by retailers such as Tesco, to introduce a more personalised and multichannel user experience.

In future, New Look will concentrate on local language sites, other currency options and the integration of mobile commerce.