Booths has outlined the most ambitious expansion plan in its history and unveiled a rise in full-year profits. 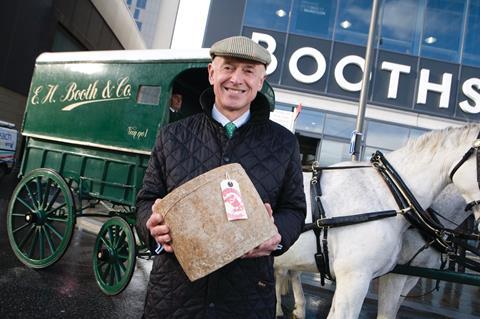 The upmarket northern grocer will open five shops in the next 18 months, up from its average of one a year, taking its store count to 34.

Booths’ pre-tax profits increased 6.9% to £3.9m in the year to March 29. Sales climbed 1% on a like-for-like and total basis as the retailer generated turnover of £282m.

Booths chairman Edwin Booth (below) told Retail Week he felt confident about the festive season. “At Christmas people take the Booths brand to heart,” he said.

As well as store openings the retailer is poised to ramp up its online offer. Booths will this year, for the first time, open up its online delivery service to the whole of the UK for the duration of the festive season.

Booth said the grocer aims to extend that on a permanent basis next year. The retailer will also launch a national ecommerce wine offering, Wine Cellar, next year.

Booth said: “We are going to look at how we can take the best of Booths to customers both within and outside the region online.”

He said Booths would consider an alternative model to those that already exist in the market. “We’re not going to ape the major multiples, we’re not going to put a flotilla of vans on the road because we don’t believe that business model is very clever,” he maintained.

Booths stores are located solely in the Northwest, and Booth conceded that demand in the South might be lower at first. However, he said the grocer has worked hard to boost brand awareness across the country in recent years.

He described the nationwide online launch as “a new iteration of the way in which we interact with customers” and said pushing outside its heartland with an online offer rather than stores is more cost-effective.

“Romancing customers with our online offering would be much more efficient than piling in with £15m of investment [in stores],” he said.

As part of its digital expansion Booths is developing an app that will help customers shop sustainably by totting up the greenhouse emissions caused by individual products.

Booth insisted he remained unconcerned about competitor Waitrose’s plans to open more stores in the North.

“Booths is a very different animal even from Waitrose who have almost, through their desire to compete, turned themselves into something much more akin to Sainsbury’s,” maintained Booth.

“Where they have positioned their stores we have competed satisfactorily so far. It’s happened throughout our 170-year history. Once it was plethora of small grocers with their unique selling points, now it’s a smaller number of larger businesses competing with us.”

Booths sources 28% of its products locally and Booth said the grocer’s attitude to sourcing sets it apart from its larger rivals. For instance, the grocer introduced the Fair Milk initiative, which ensures farms are paid a premium over and above the highest price in the market. Booth said customers have responded well.

“What Booths has proved is that a company can still grow in a market where people are beating the seven bells of hell out of their supplier base on price,” said Booth. “Trust is an incredibly valuable tool. It is worth millions to businesses.”

Booth believes structural changes in the grocery market are here to stay. “Now that shoppers are being more promiscuous I don’t think that will turn back. The knack for people like us is to be a charming brand and one that engages at a human level. That will help us grow our business.”