New Look has appointed a new retail boss amid a number of senior redundancies within its product teams.

Russell Harrison, formerly executive assistant to chief executive Anders Kristiansen, was promoted to UK and Ireland retail director at the beginning of this year. He has been with the retailer since December 2010 and has since risen through the ranks of the finance division.

He spent just under a year as executive assistant to Kristiansen, a role previously held by current UK and Ireland managing director Danny Barraso.

The appointment follows the period of tough trading for the business. It experienced a worse Christmas than the majority of fashion retailers.

Christmas trading formed New Look’s third consecutive negative quarter. That was a reversal of fortunes for the retailer, which had been the subject of a successful turnaround effort by Kristiansen, who was drafted in during 2012.

Kristiansen told Retail Week that the poor performance was linked to product weakness and a lack of authority on trends.

It has since emerged that a number of senior staff in its product team have been made redundant.

The wider design team was restructured at the time, resulting in around 20 redundancies at various levels. Retail buying manager Cathie Boulton was also made redundant. 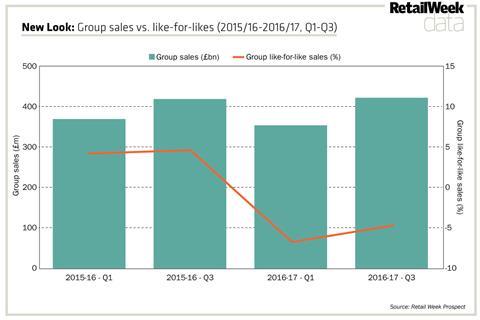