John Lewis sales rose 5.9% in the week to March 29 as shoppers basked in warm weather and bought gifts for Mother’s Day. 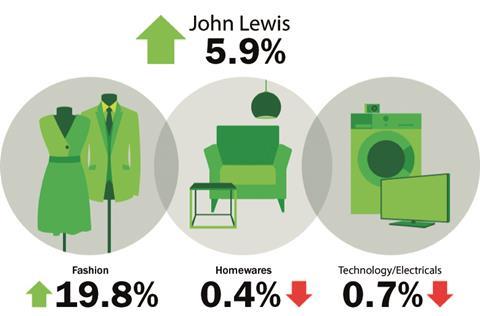 Store footfall was up and online saw its highest sales so far this half, with sales through the channel up 39.5%.

Electricals ended the week up 5.6% driven by audio ands gaming, which were up 35.4%.

Cantor Fitzgerald said the weather is being more helpful to retailers this year. Analyst Freddie George said: “Retailers, we believe, are now coming up against relatively easy comparatives. The last three weeks of April in 2013 were disappointing predominantly due to the cold weather over the period, which affected sales of spring/summer fashion and led to an acceleration of discounting ahead of the first May Bank holiday. As such, we believe the mainstream retailers, such as M&S and Debenhams, will fare better this year.”

At John Lewis’ sister retailer Waitrose, the timing of Easter in this week last year meant sales fell 7.9% in the week to March 29. Commercial director Mark Williamson said: “This was entirely in line with our expectations, as the trading week is being compared to the pre-Easter week last year – traditionally one of the busiest periods of the year.”

Comparing sales to the week leading up to Mother’s Day 2013, Williamson said gifts rose by 95%, cards were up 27% and flowers and plants were up 31.5%. The good weather helped gardening product sales rise 20%.