New premium menswear etail site Mr Porter has gone live this afternoon but only to its' founding members. 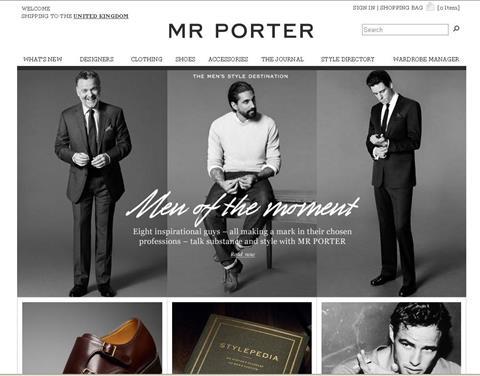 Mr Porter set up a scheme whereby prospective customers could register to be "founding members" of the site and now these individuals have early access to mrporter.com.

The site will open to the general public on Tuesday, according to the Mr Porter twitter feed.

The editorially-led site includes home page features such as The 32 Essential Items Every Man Should Own, a video interview with designer Paul Smith, a Journal section which functions as an online magazine, and a style directory offering customers styling advice.

The site also interviews eight men of the moment including a musician, a poet and a motorcycle designer about their wardrobe choices.

The first purchase made on the site following launch was a pair of Gucci sunglasses.

Mr Porter is aimed at affluent male shoppers and will offer more than 80 brands including Ralph Lauren, Burberry and YSL across menswear, footwear and accessories in addition to offering style advice.

In June last year Natalie Massenet, founder and executive chairman of Net-a-Porter, said: “This is an incredibly exciting new venture for us and one we have been planning for some time. We have always said that Net-a-Porter will remain a woman’s brand and now we are ready to create a dedicated men’s shopping destination entirely conceived with the stylish man in mind."

Those who signed up to be founding members should check their email inbox for details on how to access the site.