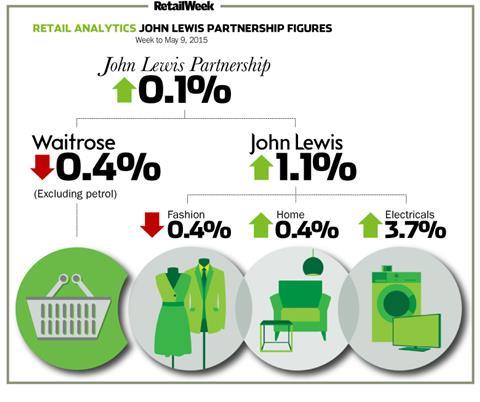 John Lewis said it was a “week of two halves”, with a positive start thanks to in-store bank holiday events and good weather driving sales of its outdoor living collection, which was up 10% on the year.

But the second half of the week was disrupted by a change in weather and the general election, which it said slowed footfall and sales. But the retailer still reported a 1.1% rise on sales on the previous year.

Fashion fell 0.4% on the year. John Lewis held price matching activities the week before which it said pulled forward sales. Meanwhile, men’s shoes sales rose 10%, jewellery was up 9% and following the Royal Baby, both babywear and nursery categories increased 16% and 18% respectively.

Online sales rose 17% across all departments, with fashion up 16%.

Trade at Waitrose was hit by tough comparatives and the continued drag of food deflation, leading sales to fall 0.4% year on year.

But the warm bank holiday led to an increase in Champagne by 17%, while Argentinian wines increased by 58%, world beer by 10% and local beers by 17%.

Garden plants saw a substantial sales increase of 62% as people made the most of the sunshine earlier in the week.