In Focus: Hamleys versus The Entertainer

Hamleys is a British retailing enigma. The best-known name in toy retailing, its iconic Regent Street store is an international tourist destination to rival Harrods. 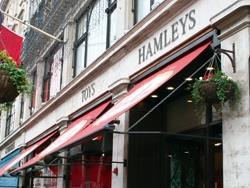 Yet, as chronicled in its new Retail Week Knowledge Bank profile, over the years Hamleys has failed to capitalise on its name to create a provincial network. Today, it comprises just the flagship, a large new store in Glasgow, three airport units, a presence in Eurostar’s St Pancras terminus, plus one remaining factory outlet store.

In 10 years UK sales have risen from £27m to just £40m, falling in four years including the latest two - and with a patchy profit record to match. The over-riding question remains why management has failed to establish a sustainable regional network, given the name and wide recognition?

In the meantime, that much newer kid on the toy shop block, The Entertainer - another new profile - has expanded from 20 to 55 stores, with sales jumping from £17m to £66m and remaining consistently, albeit modestly, profitable.

Both have had to contend with Toys R Us plus major non-specialists like Argos and the superstores. It is instructive that Gary Grant, leading The Entertainer from the front, stepped up expansion to capitalise on Woolworths’ demise. Hamleys, in contrast, has contracted, closing various airport, factory shop and concession stores. Management has been exploring overseas possibilities, while The Entertainer keeps expanding domestically and is welcomed by landlords, despite not opening on Sundays on religious grounds.

It is a stark difference and one, ultimately, that must be ascribed to management - or, in Hamleys’ case, successive managements. It has been a wasted opportunity, given the advantage of the Hamleys’ heritage, which is probably too late to rectify.

For comprehensive analysis of every top 200 retailer in the UK, visit retail-week.com/rwkb