House of Fraser has upped the ante in competitive fulfilment after extending the cut-off point for customers using its buy-and-collect service. 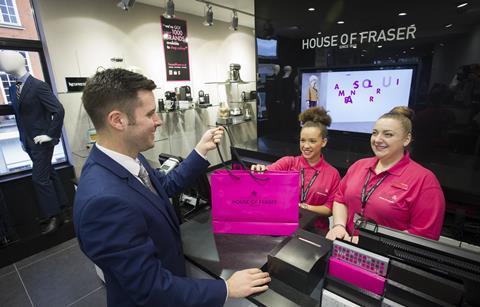 The department store chain has pushed back the deadline for orders from 10pm until midnight for shoppers wanting to collect their purchases in store. Customers will still be able to pick up their shopping from House of Fraser stores from midday the next day.

Bosses at the retailer, which launched its buy-and-collect proposition in 2010, believe the “pioneering” move gives it “the best delivery proposition in the market”.

Department store rival Debenhams has a 7pm cut-off point for click-and-collect customers who wish to pick up their goods from 12pm the next day.

John Lewis has an earlier deadline of 8pm, with customers able to collect their shopping from 2pm the next day.

Next allows its customers to order until 10pm for a 12.30pm next-day collection, while the cut-off point for Marks & Spencer shoppers is 5pm for a midday pick-up.

House of Fraser said the changes to its buy-and-collect service, which came into effect earlier this month, showed that it “has continued to adapt to changing shopping habits and consumer demands”.

House of Fraser chief customer officer Andy Harding said: “We know that flexibility is key for our customers to fit in with their busy lifestyles so we are constantly investing in expanding the delivery and collection options at House of Fraser.

“From this month customers are able to order online up to midnight and collect their purchases in store the following day, which repositions us as having the best delivery proposition in the market.”