Homebase intends to shut 42 stores, putting 1,500 jobs at risk, as part of its turnaround push.

The closures were revealed in a CVA proposal today, on which creditors will vote on August 31.

The CVA follows the sale of Homebase for £1 to restructuring specialist Hilco in May. 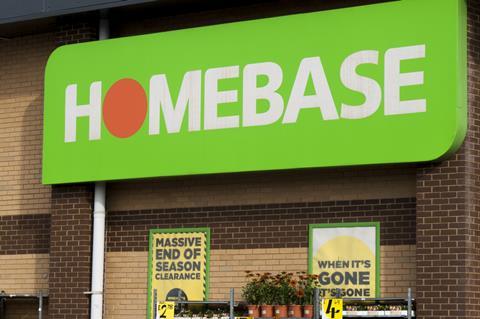 Only two years ago, Australian giant Wesfarmers paid £340m for Homebase, which it intended to convert to its Bunnings fascia. However, the business was brought low by mismanagement as Wesfarmers immediately ousted Homebase’s UK leadership team and replaced it with its own executives, and abandoned popular lines such as home furnishings.

Homebase said today its performance and profitability “declined significantly under the previous ownership over the last two years”, on top of which it is confronting “an extremely challenging retail trading environment reflecting weak consumer confidence and reduced consumer spending”.

The retailer said its store portfolio mix is no longer viable because rental costs are unsustainable and many stores are loss making, but that a CVA would enable it to cut costs and create “a stable platform” for a turnaround.

Chief executive Damian McGloughlin said: “Launching a CVA has been a difficult decision and one that we have not taken lightly. Homebase has been one of the most recognisable retail brands for almost 40 years, but the reality is we need to continue to take decisive action to address the underperformance of the business and deal with the burden of our cost base, as well as to protect thousands of jobs.

“The CVA is therefore an essential measure for the business to take and will enable us to refocus our operations and rebuild our offer for the years ahead.”

CVAs, particularly House of Fraser’s, have proved controversial among landlords.

However, British Property Federation assistant director of real estate policy Stephanie Pollitt said of Homebase’s plans: “These situations are never easy as property owners need to take into consideration the impact on their investors, including those protecting their investors’ pensioners’ savings, as they vote on the CVA proposal.

“Homebase and [adviser] Alvarez & Marsal have, however, demonstrated best practice, engaging with the BPF in the process and therefore ensuring property owners’ interests have been properly taken into account.

“Ultimately, it will be for individual property owners to decide how they will vote on the CVA, but the proposal has sought to find a solution that provides a sustainable future for Homebase.”

The 42 stores are expected to close in late 2018 and early 2019. The retailer said that “every effort will be made to redeploy team members within the business where possible”.

Homebase’s CVA plans come at a tough time for DIY retail in general. Last month, Wickes’ parent company Travis Perkins took a hit to profits and launched a business review after its DIY division was hit by tough trading conditions and bad weather.

On Thursday, Kingfisher, owner of market leader B&Q, will update on its second-quarter trading.

This story was updated at 12.50pm following formal confirmation of plans to proceed with a CVA.