Tesco is trialing an innovative consumer buying model which will allow its shoppers to use social media to bring down the price of products. 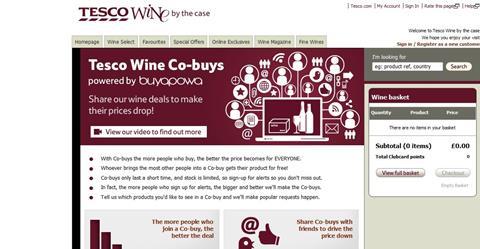 The grocer has partnered with co-buying specialist Buyapowa to launch a wine ecommerce site that harnesses the group buying power of consumers.

Tesco Wine Co-buys, which launches next week, allows shoppers to register interest in products, the most popular of which is then put forward for sale. Shoppers commit to a maximum price but the price point falls as the number of people that purchase the product increases.

The shopper who amasses the most follow-up purchases among other consumers, after sharing deals through social media, will win a case of wine.

Tesco director of digital and social Tom Daniell said: “This channel really puts customers in control – from determining the final price they pay, to telling us the products they’d like to see featured.”

The deals last for a limited amount of time or until stock has run out.

Tesco will consider whether to extend it to further categories which could include health and beauty, home and garden and sports following the 12-week trial.

Lask said Buyapowa is in talks with further retail clients.

Tesco director of digital and social Tom Daniell said: “There’s a real social element to traditional shopping and there’s no reason why shopping online shouldn’t be just as fun. Family and friends love to shop together and seek out a bargain and co-buying lets customers easily share deals online and use collective buying power to get a great deal.

“This channel really puts customers in control – from determining the final price they pay, to telling us the products they’d like to see featured. We’re excited by the possibilities co-buying brings to online shopping and we’re looking forward to hearing what our customers think over the next few weeks.”

Lask said: “If brands are to realise the full potential of social media, their social strategy needs to be better aligned with their business strategy. It’s not enough merely to collect fans and followers.

“Given some of the current challenges faced by retailers, social media is more important than ever, but applying traditional e-commerce models to social media simply doesn’t work. It’s not as simple as opening a shop in Facebook, it’s about passing some control back to the consumer and empowering them. That’s what buyapowa and co-buying enables and we’re excited to partner with a major retail brand such as Tesco, which recognises the true potential of social commerce.”