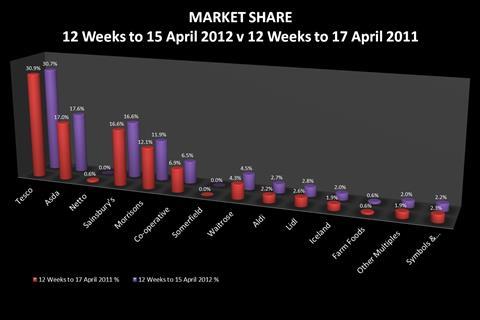 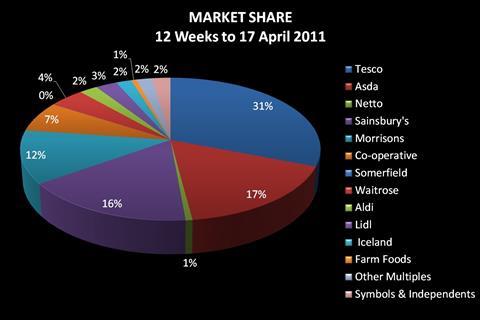 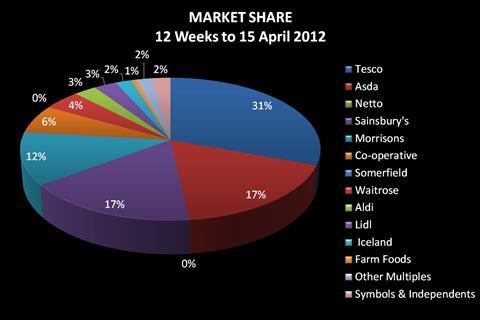 Waitrose, Aldi and Lidl all made gains as Tesco and Morrisons market share slipped, the latest data from Kantar Worldpanel reports.

Kantar data for the 12 weeks ending April 15 shows an increasingly polarised spend with Waitrose increasing market share from 4.3% to 4.5% and Aldi’s share rising to 2.7% from 2.2%.

The Co-operative continued to see its market share slip, falling from 6.9% to 6.5%.

Iceland and Waitrose continue to perform well in terms of sales growth, with a 9.1% and 9% change in total sales respectively. Aldi was the star performer, recording a 27.9% growth rate.

The grocery market as a whole grew at 5%.

Kantar Worldpanel director Edward Garner said: “The discounters and Waitrose are outperforming the middle ground as shoppers polarise their spend. To this effect, Aldi and Lidl continue their strong run and both achieve record shares this period.

“Iceland’s growth rate of 9.1% is also racing ahead of the market – further proof that consumers are convinced by strong value-for-money messages.

He added: “Waitrose sees no slowdown in its growth as some households refuse to let economic pressures affect their food purchasing.

“This may also be a result of cutbacks on eating out which have meant that some shoppers are willing to spend more money on bringing the dining out experience into the home. The continued growth of premium own-labels, particularly Tesco Finest and Sainsbury’s Taste the Difference, is further evidence of this behaviour.”