Three Aldi adverts that claim customers could make significant savings have been deemed misleading by the Advertising Standards Authority (ASA). 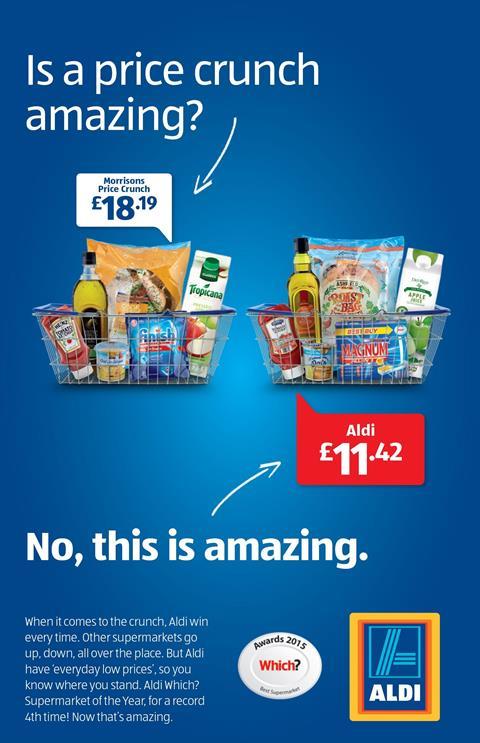 One of the adverts that Morrisons complained about

Rival Morrisons and two members of the public complained that an ad claiming a £70 Aldi shop would cost £98 at the big four supermarkets did not make clear that the discounter’s own brand was being compared with branded products.

Aldi UK and Ireland chief executive Matthew Barnes said he was “extremely disappointed” with the ASA’s decision, which he said was “ambiguous and inconsistent”.

He said: “The use of comparative advertising is a well-established principle, is firmly in the interests of consumers and encourages competition between retailers.

“We will work within this new guidance from the ASA and continue to promote the significant price gap between Aldi’s quality, award-winning products and their higher priced brand equivalents.”

The ruling applied to two TV adverts and a press advert. The press ad specifically compared its cheaper basket to Morrisons’ Price Crunch with text that read: “When it comes to the crunch, Aldi win every time. Other supermarkets go up, down, all over the place. But Aldi have ‘everyday low prices’, so you know where you stand.”

“The use of comparative advertising is a well-established principle, is firmly in the interests of consumers and encourages competition between retailers”

The ASA said: “We acknowledged that Aldi stated they had not intended the comparisons to represent a ‘typical’ weekly shop, but to be a comparison between the pictured products only.

“Nonetheless, we considered that was how consumers would interpret the adverts rather than as a representation of the savings which could be made by switching from a largely branded shop to shopping in Aldi, and therefore assessed them on that basis.”

The adverts must not appear in the same form again and the ASA told Aldi that when making multi-product comparisons in future the supermarket must not imply it was comparing typical weekly shops unless it held evidence that the products were a “fair and truly representative” selection.