Dixons Carphone has hailed a “good start” in its first results following the merger of Dixons Retail and Carphone Warehouse on August 7. 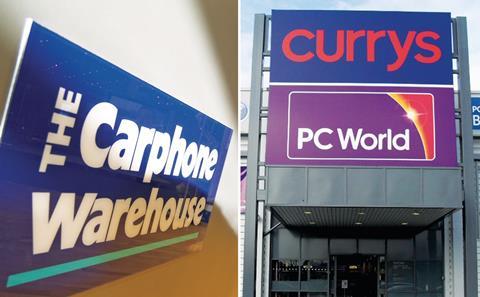 Dixons Retail’s like-for-like sales were up 4% in the UK and Ireland for the quarter ending August 2, while Carphone Warehouse’s like-for-likes were down 6%against a strong performance in the prior year and difficult conditions in Spain.

In the comparable period last year Carphone Warehouse’s like-for-like sales were up 13%.

The newly formed retailer revealed integration is progressing well with store-in-stores ahead of plan and added the company will join the FTSE 100 on 22 September.

Dixons Carphone group chief executive Sebastian James said: “The integration is going well with seven departments now serving both parts of the business in an integrated way and, although it is early days, our 11 stores-in-store are performing ahead of the business case that we set out in our merger announcement.”

Dixons’ electricals business recorded a strong start to the quarter with sales boosted by the World Cup as the retailer heavily marketed its TV range to football fans.

James said the company’s mobile business was slower in the first quarter than last year because of an “exceptional period of promotional activity”.

He also pointed out the company continues to have “strong relationships with all our network partners, which means that we are now the only place where customers can really choose the proposition that is perfect for them.”

His comments come after it emerged last week that Phones 4u had lost its contract with Vodafone, which has led to talk of a sale of the retailer by its private equity owners.