This week in retail: Does Dixons Carphone still have its spark? 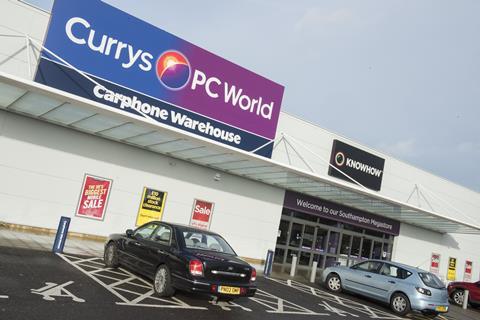 And his confidence, despite being a self-confessed staunch remainer, has been mirrored by solid results and continued market-share growth.

At the time, the business bullishly stated that Brexit had not affected shopper behaviour. But the retailer’s interim results this week will give more of an indication as to how the industry has fared since.

Beyond James’s show of confidence, the City seems to have faith in the electricals giant – and there is an expectation that Wednesday’s results will demonstrate continuing progress.

Analysts at Liberum have optimistically declared that consumer confidence is “better than many expected”, and the market’s fears around how currency fluctuations would impact the company have been “overdone”.

The retailer also plunged head-first into Black Friday and is expected to unveil record final order numbers for its Black-Tag event.

On the big day itself, order numbers at its Currys PC world fascia were up 40% on 2015 by 9.30am, with more than half a million visitors flocking to its website before 6am.

However, James admitted that, this Christmas, Dixons Carphone will “miss” the Samsung Galaxy Note 7, which was pulled from shelves earlier this year.

And, although he assured Retail Week that customers would not notice price increases, there will be interest in how the retailer plans to mitigate inflationary headwinds.

The business may also give an update on its expanded KnowHow services proposition – being piloted in Leeds – which James has described as a “billion-pound opportunity”.

All in all, with 17% profit growth in its last full-year, defined by James as “momentous”, Dixons Carphone has a lot to live up to.

Elsewhere, Carpetright will update the City on its extensive refurbishment programme at its interim results on Tuesday.

The retailer, which last updated in the week after the referendum, will provide a good indication of the current health of the home and DIY sector.