John Lewis sales increased 7.5% to £71.12m in the week to August 2 as shoppers flocked to its department stores for new season product. 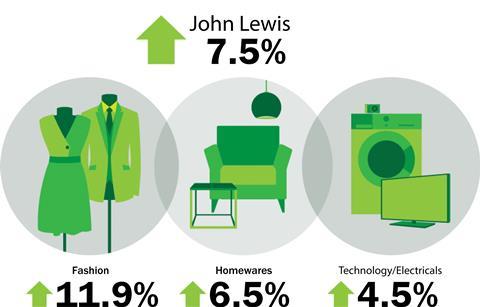 In electricals and home technology sales were up 4.5% driven by audio and gaming. Refrigeration and fan products also sold well as customers tried to keep cool in the hot weather.

In home, sales increased 6.5% as the ‘Any Shape, Any Fabric’ offer in upholstery propelled demand. Beds also did well, up 25%.

John Lewis buying director for home Christine Kasoulis said that the Commonwealth Games, of which the department store group was a partner, inspired shoppers to buy sports gear, as sales jumped 32% last week.

She added: “Overall it was a positive story for the first week of the half. The combination of new season products and partners who ‘love to sell’ gives great confidence for trading over the coming weeks and beyond.”

Sister retailer Waitrose delivered a 6% sales rise to £118.94m despite trading against a strong week this time last year when the UK enjoyed its hottest day since 2003.

The final week of the Commonwealth Games also boosted Waitrose, where sales of ready meals were up 13%. The games, held in Glasgow, also drove sales of Scottish whisky.