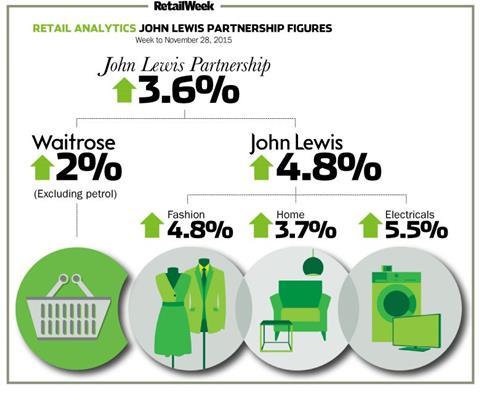 John Lewis’ distribution teams processed 18% more parcels over Black Friday and the following Saturday and Sunday than during the same period in 2014, equating to five units being processed per second during the peak hour of trading.

John Lewis’ operations director Dino Rocos said: “This is a testament to the work of our partners both on Black Friday itself and in our forward-planning.”

Electricals and home technology sales were up 5.5% compared with 2014, with small electrical items up 15.2%. Wearable tech performed particularly well, with sales surging 850% on last year, while sales of Fitbits rocketed 1,200%.

John Lewis’ homeware sales increased 3.7%. Fitted furniture sales were up 31.7% and bed and bedroom furniture was up 21.2% year on year.

Sales of Christmas decorations and gift food were both down compared with 2014, although John Lewis reported that shoppers were focused on bigger Black Friday purchases and sales in these areas were expected to increase as Christmas approaches.

“Looking ahead, our teams in our shops and online operations are ready for another busy week as we go into the first full week of December,” said Rocos.