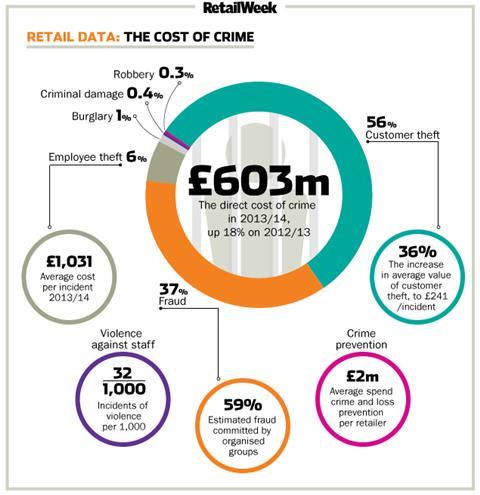 As retailers strive to keep costs down in the tough environment, “sophisticated” thieves are targeting high-ticket goods and forcing firms to shell out millions of pounds to beef up their security.

Retailers suffered an estimated 3 million offences resulting in loss or damage in 2013/14, with the average value of customer theft soaring 36% in just one year, from £177 to £241 per incident.

That figure stood at a mere £45 per incident just five years ago.

It meant the overall cost of crime to the industry broke the previous record of £600m set back in 2010/11 – and represented an eye-watering 18% rise from last year’s total of £511m.

The steep rise in crime across the sector resulted in retailers paying an average of £2m last year on crime loss and prevention schemes.

In some cases, violence against staff was also reported, with 32 incidents of physical abuse, non-physical abuse or aggressive behaviour recorded per 1,000 retail employees.

But thefts by employees fell for the third year in a row in 2013/14, with goods stolen by staff now accounting for just 6% of all retail crime by value.

Employee theft did however set the industry back an average cost of £1,031 per incident last year.

The figures were revealed as part of the British Retail Consortium’s Retail Crime Survey 2014, which also found an increase in cyber crime including data theft.

The majority of those incidents were said to be committed online, with credit and debit card fraud costing retailers almost £134m last year alone.

Retailers questioned in the survey, which covered 50% of the retail sector by turnover and its 1.6m staff, warned that such fraud would become the biggest crime threat to their businesses over the next two years.

“Despite an average investment of £2m per business in crime and loss prevention, retailers need help and support to respond to the threat.”

One third of respondents to the survey said they intended to invest even more in crime and loss prevention over the next two years, while half expected to spend the same amount.

Just 14% of those who took part in the survey said they would be investing less in security measures.

Helen Dickinson, director-general of the British Retail Consortium, said: “Criminal activity against UK retailers continues to have wide-ranging consequences for businesses, employees and the vast majority of honest shoppers.

“The average cost to retailers of theft has now reached £241 per incident, the highest in a decade. Fraud committed online also continues to rise.

“It is clear that retailers are facing an increasingly sophisticated criminal. Despite an average investment of £2m per business in crime and loss prevention, retailers need help and support to respond to the threat.

“Police and Crime Commissioners should follow the lead set by the Mayor of London and work with retailers to develop dedicated business crime strategies to help tackle this growing problem.”