Screwfix sales rose 23.2% and 13.8% on a like-for-like basis to £1.29m. This was driven by strong growth at specialist trade desks, strong digital growth and the continued roll out of new outlets.

Over the year, 60 new outlets were opened, taking the total to 517. Kingfisher is now targeting 700 UK Screwfix outlets, up from 600 previously.

Kingfisher delivered its One Kingfisher strategy first year objectives and said that it was “well set up” for its second year of transformation. 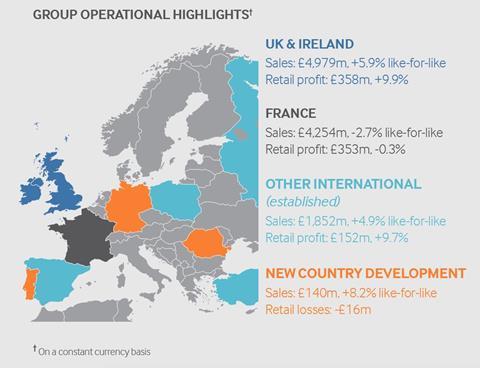 Cosslett joins Kingfisher in April as a non-executive director and chairman designate.

Bernard will step down in June at Kingfisher’s AGM after eight years as chairman and 11 on the board.

Cosslett comes from a varied background which includes stints at FMCG giants Unilever and Cadbury Schweppes, and six years as boss of InterContinental Hotels and another three at Fitness First.

Chief executive Véronique Laury said: “I would personally like to thank Daniel for his support and wise advice since my appointment as CEO two years ago.

“He has supervised the new strategic thinking as well as the first successful year of transformation with challenge and dedication. I have been lucky to work with him.

”I now look forward to working with Andy, remaining as confident as ever in our ability to deliver our plan.”