Discount retailers have opened stores at a faster rate than supermarkets and convenience stores over the past five years. 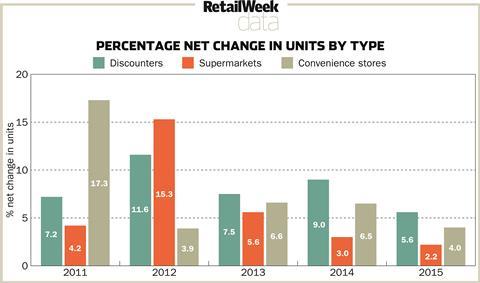 In comparison, the CAGR of supermarkets Tesco, Sainsbury’s, Asda, Morrisons and the Co-op was 6%.

In the recent years the big grocers have had to adapt to changes in consumer behaviour and have moved away from acquiring larger sheds. They have been hit by many consumers ditching larger shops in favour of the convenience of top-up shops throughout the week.

The total number of convenience stores recorded CAGR of 7.6% during the five-year period.

“The numbers are significant and reminiscent of a car crash in slow motion.”

The number of supermarkets has increased just 2.2% so far in 2015, while the number of convenience stores has risen by 4%. Discount store openings have jumped 5.6% since the start of the year.

Over the five-year period, Tesco recorded the greatest increase in the number of stores, opening 1,104 new supermarkets and convenience shops since 2011.

LDC director Matthew Hopkinson said: “This research clearly shows why the supermarket operators are struggling. This comes not only as a result of deflation and subdued consumer spend, but also a massive increase in competition both from outside but also within.

“This is illustrated by the fact that the big four supermarkets opened more than 500 new stores since 2011 and while doing this also opened nearly 2,000 convenience stores.

“At the same time as this the discounters have increased their store numbers by nearly 1,400 and have a serious alternative to the big four supermarkets both on price and offer.

“So the numbers are significant and reminiscent of a car crash in slow motion – and that’s before one includes the symbol groups and the rise of the M&S Simply Food and Waitrose/Little Waitrose, which this research has not included.”

Shore Capital analyst Clive Black said: “What is clear is that there is a very high price being paid for investors in the superstore groups from not recognising and responding to the evolving industry.

“Matthew Hopkinson writes of a car crash for superstore operators. We’d call it a high impact motorway smash when measured in terms of earnings, with the superstore vehicles now in the garage, assessments undertaken and repair under way.

“That repair requires a major conservation of capital, so the virtual abandonment of superstore openings, a store-by-store reassessment of space utilisation and, perhaps most important of all, the fundamental reappraisal of the offer, focusing particularly on narrowing the discounter price differential and starting to try and sell from a position of greater price confidence the virtues of the superstore and hypermarket.”

Black added: “Shore Capital believes that the superstore reset has just started but represents a more stable future for the format. Additionally, partial normalisation in shopping behaviour may lead to a slowdown in the rate of momentum that convenience and discount has enjoyed.

“Whatever the outcome, the superstores’ battle for survival will be good for shoppers.”