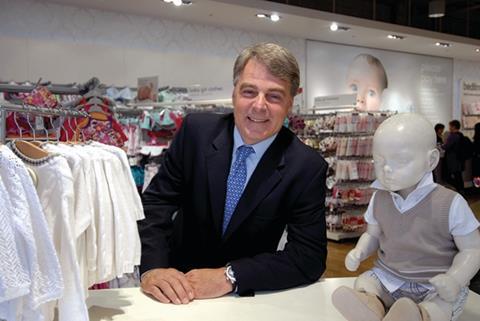 Maternity specialist Mothercare is likely to seek a new chief executive from beyond the boundaries of traditional retail to put it back on track in the UK and continue global growth.

Following news this week of the sudden departure of chief executive Ben Gordon – who will leave in mid-November – sources familiar with the thinking of Mothercare’s board, led by chairman Alan Parker, said that candidates with branded consumer goods expertise are likely to lead the pack.

Mike Logue – who joined Mothercare from Asda earlier this year to run its embattled UK business – is set to play a key role in the turnaround but is unlikely to succeed Gordon as chief executive.

One source said that, despite its problems in the UK, Mothercare is best viewed as a branded consumer goods business – it owns Early Learning Centre as well as the Mothercare brand – whose products are sold through a variety of channels including franchises, online and wholesale.

Gordon himself came from a similar background, having worked at both Disney and L’Oréal.

Another source said that, although addressing problems in the UK is vital, Parker believes that focus on the Mothercare brand – including wholesale and franchising opportunities in particular – still offers great untapped potential.

He said: “It hasn’t got its product offer right and it isn’t competing on price with online and supermarkets. 90% of pregnant women go into a Mothercare store but it’s not converting that huge footfall into sales.”

Stevenson said that Logue is well placed to reposition Mothercare’s UK business because of his supermarket background.

Both analysts said that Mothercare risks jeopardising its overseas growth if the UK business is not repaired, because its international operations are built on the strength of its UK brand.

Gordon will leave the retailer when it issues interim results next month, having spent almost nine years in charge. He was originally parachuted in to get Mothercare out of a mire after several profit warnings, and won praise for the improvements he made.

However, as tough domestic trading conditions bit, Mothercare has again been forced to issue profit warnings, three times in the last year.

In the most recent, last week, the retailer posted a 9.6% UK like-for-like decline over the 12 weeks to October 1 and said consumer confidence had fallen off a cliff in the last four weeks. International retail sales climbed 17%, however.

Mothercare has 1,322 shops in 55 countries, but the UK is the motor of the business so difficulties at home have hit the retailer hard.

Last week The retailer issues a profit warning, its third of the year