Next partners with Morrisons on collect and returns ‘pods’

Fashion giant Next has partnered with grocer Morrisons to trial new collect and return ‘pods’ in two supermarket car parks. 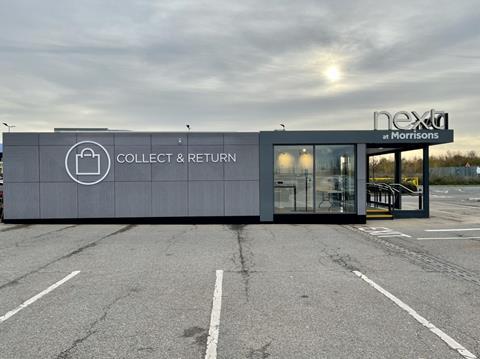 The pods opened this month in Morrisons car parks in Leominster in Herefordshire and Canvey Island in Essex.

Customers will not be able to purchase Next items at the pods but they will be able to collect or return online purchases.

A Morrisons spokeswoman said the pilot was being aimed at areas that did not have nearby Next stores, making “it more convenient for those customers that live in those areas”.

Since the first lockdown in March, both Next and Morrisons have been looking to expand their reach through partnerships.

In October, Next unveiled a tie-up with Laura Ashley, selling the brand’s homeware products across its 500 UK stores and via its website which operates in over 70 countries.

It also finalised a joint venture with L Brands to take over the UK arm of Victoria’s Secret, including 18 standalone stores, in September and launched its new Beauty Hall offering in four shopping centres in October.

Speaking about the retailer’s interim results in September, chief executive Lord Wolfson said the coronavirus crisis had opened up new avenues for innovation.

“We’re seeing much faster development of new opportunities than we would’ve expected at the beginning of the year,” he said.

Morrisons has looked to expand its online delivery capabilities, expanding its existing partnership with US tech giant Amazon and rolling out a tie-up with Deliveroo in April to help reach vulnerable and shielding customers.

Other retailers have also looked to leverage the growth in online shopping by expanding click-and-collect trials, including former bricks-and-mortar-only grocer Aldi, and a tie-up between department store group John Lewis and the Co-op in July.