John Lewis Partnership said it has reported a “solid first half in a difficult market” as profits came under pressure at department stores. 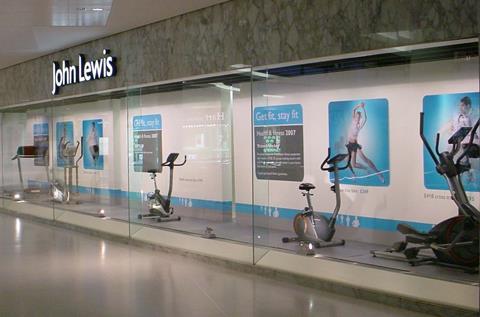 Excluding these, at a trading level profits in the fist half to August 1 were “broadly level with last year”, Mayfield added, reflecting “tight management of costs and the steps we have taken to strengthen the appeal of our trading brands”.

However pension charges, and the “tough environment”, are expected to hit the Partnership in the full year too. It expects pre-tax profit before exceptional items for the year ending January 30, 2016 to be between £270m and £320m versus £342.7m last year.

At John Lewis operating profit fell by 16.3% to £47.1m, impacted by restructuring costs, incremental costs for holiday pay and “absorbing a greater share of centrally incurred functional costs”.  It also said it reflects the “costs associated with the ongoing shift in both channel and fulfilment mix”.

At Waitrose operating profit before property profits edged up 0.6% to £135.5m.

The department store group achieved a 3% rise in like-for-likes and gross sales were £1.94bn. However store sales fell 1.8%, “partly due to comparison to 150 Year anniversary celebrations last year”. Compared with two years ago, store sales increased 1.7%.

Fashion sales climbed 7.5% as John Lewis’ own brand offer paid off, while home sales advanced 4.9% driven by outdoor. Electricals and home technology sales slipped 0.7% against challenging comparables and a “lack of new product launches in the home technology market”

Like-for-like sales were down 1.3% – the first fall in seven years, reflecting a “tough” grocery market with price deflation, as well as a strong prior year comparative when Waitrose promoted heavily online. Online slaes for the half dropped 13%, due to the tough comparables. Average order value online was up 8.2%

Market share was up at both retailers, the Partnership said, with customer numbers up 7% in Waitrose and 6% in John Lewis.

Mayfield added: “Conditions in the market will remain difficult, especially in grocery where there is little sign of any price inflation.  However, I expect sales in both Waitrose and John Lewis to perform comparatively well against the market, helped by promising new ranges and online capability