John Lewis sales jumped 20.5% to £74.6m in the week running up to Easter as its new York store had a “splendid” first week of trading. 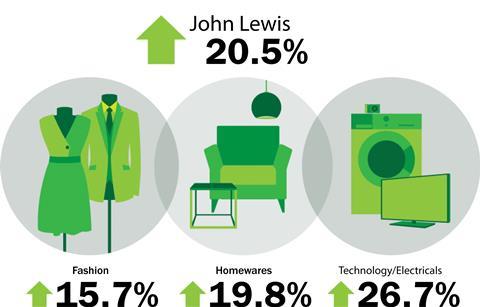 Andy Street, managing director, said the highlight of the week was the “splendid first full account” of the 92,000 sq ft York store, which opened on April 10.

Street said April was “shaping up to be pretty strong overall”.

Although electricals and home technology posted the biggest growth, with sales up 26.7% in the week to April 19, Street said the 19.8% surge in its home division arguably showed the most optimism.

He said: “Inevitably Easter gifting lifted trade, but it was another steady build in furniture and furnishings that stood out, confirming our sense of opportunity in a strengthening market.”

Its John Lewis at Home fascias experienced “excellent growth”, with Ipswich, Swindon, Chester, Croydon and Newbury all jumping at least 40%.

Fashion sales rose 15.7% over the week with childrenswear the star performer. A strong menswear performance confirmed it had “hit the spot” with its spring offer, said Street.

Online sales increased 23.1% over the week.

Street said: “The week saw the next stages of our 150 year commemoration taking shape. With just 10 days to go until the ‘big birthday’ the story of John and Spedan Lewis is being told across the media, and plans are in place to share our story with customers from next weekend.”

Inevitably confectionary did well. Collins said: “Those customers who gave up sweets and treats ahead of Easter appeared ready to reward themselves.

“Sales of seasonal confectionery grew by 19%, dessert sales shot up by 27% and ice cream sales soared by 39%. Hot cross buns were as popular as ever with sales rising by 11%, while it would seem more and more people are sending Easter greetings cards as sales jumped by an impressive 73%.”

Lamb was still the dish of choice for Easter Sunday with sales leaping 142% and sales of pre-packed beef increasing by 114%.

The warmer weather also meant alfresco dining was high on the agenda.

Sausage sales were up 61% year on year, pre-prepared salads increased by 48% on last year, with sales of coleslaw dressed with low fat yoghurt performing particularly well.