House of Fraser has held talks with rescue fund Alteri and entrepreneur Philip Day in its search for a new owner.

The beleaguered department store informed the market yesterday that its prospective owner, Chinese conglomerate and Hamleys owner, C.Banner, had pulled out of a takeover deal. 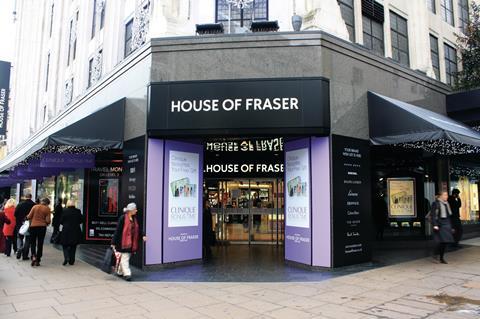 The chain is now in talks with several prospective investors, including Philip Day and Alteri, according to Sky News.

Details of a bid from Day, who owns Edinburgh Woollen Mill, Peacocks and Jaeger, are unclear. Day declined to comment.

This leaves House of Fraser vulnerable, with accountancy firm EY on standby to handle its potential collapse, The Daily Telegraph reports.

Sports Direct owner Mike Ashley, who has an 11% stake in House of Fraser, is another potential source of funding. He has proposed providing a £50m secured loan to the ailing retailer.

House of Fraser said yesterday discussions with alternative investors were “ongoing” and “a further announcement will be made as and when appropriate”.

This leaves House of Fraser vulnerable, with accountancy firm EY on standby to handle its potential collapse, The Daily Telegraph reports.

C.Banner had agreed in May to take a controlling stake in House of Fraser and inject £70m to help fund its turnaround strategy.

But in a statement to the Hong Kong stock exchange yesterday, it said the deal was “rendered impracticable and inadvisable [and will] be terminated with immediate effect”.

It previously said the deal would be postponed until October after a group of landlords launched a legal challenge against House of Fraser’s CVA.

The department store plans to shut 31 of its 59 branches, but landlords represented by Begbies Traynor and JLL have filed a challenge on the grounds of alleged “unfair prejudice against certain creditors [and] material irregularities in the implementation of the CVA”.

The chain’s struggles have steadily worsened since it was acquired by Chinese conglomerate Sanpower in 2014. A tough department store market has exacerbated its trading woes.