Food sales fell for the first time this year after a bout of cold and wet weather in July. 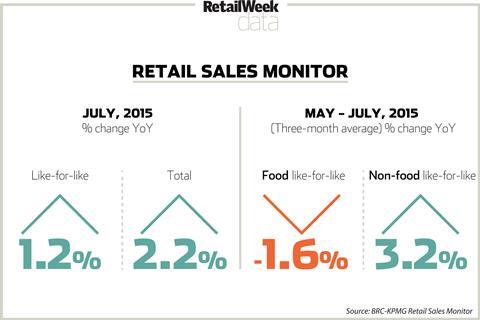 Like-for-like food sales were down 1.6% excluding Easter distortions in the three months to the end of July, according to the BRC-KPMG Retail Sales Monitor.

Food was the worst performing category in a month that otherwise recorded overall growth in retail sales across all categories.

Sales increased 1.2% on a like-for-like basis in July, while on a total basis sales grew 2.2%

Furniture, home accessories and house textiles were three of the top four performing categories after benefiting from a revitalised housing market.

“Despite 27 consecutive months of falling shop prices it seems that consumers remain content to budget carefully on their necessary food outlay and spend that little bit more on purchases they have perhaps deferred.”

Commenting on the grocery sector performance, IGD chief executive Joanne Denney-Finch believes sales were down because of the disappointing weather because “food and drink sales are particularly influenced by the weather at this time of year”.