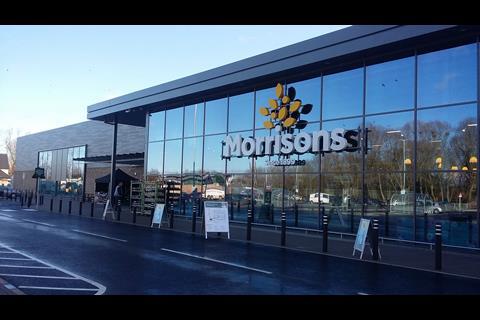 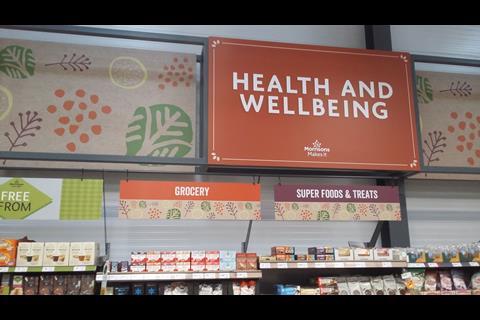 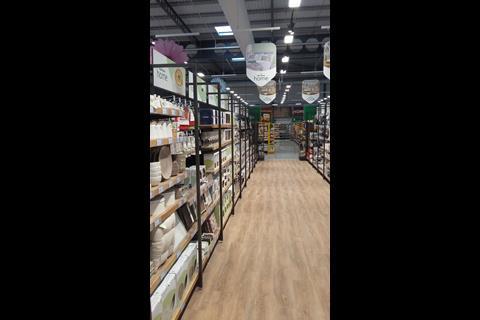 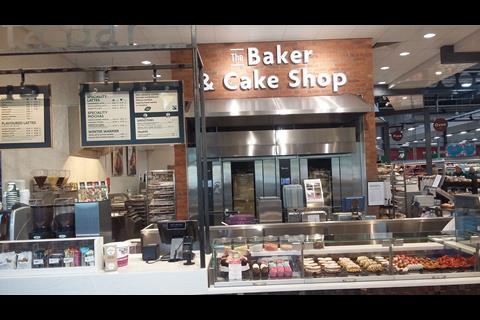 The Baker and Cake Shop 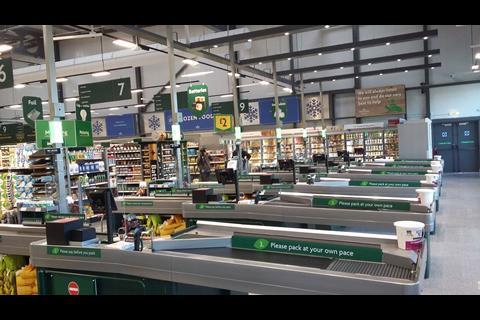 The checkouts are less of a barrier than is the norm 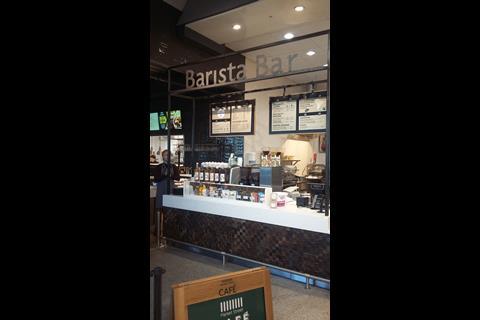 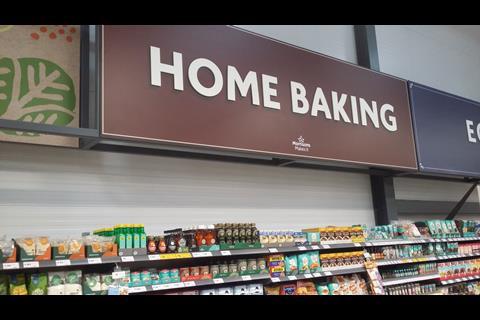 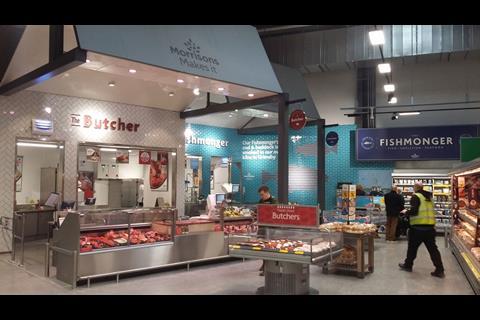 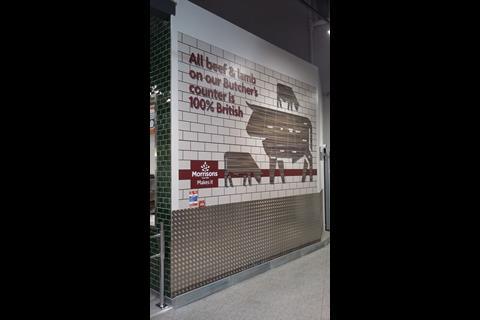 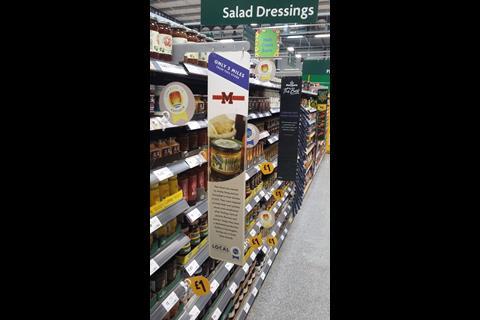 Morrisons is pushing its 'local' credentials 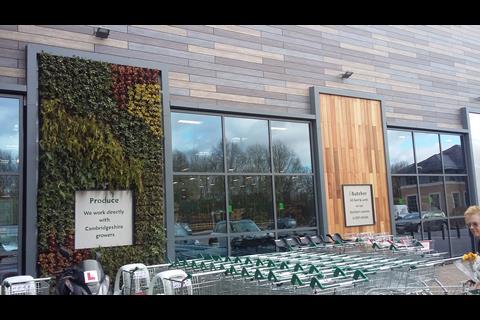 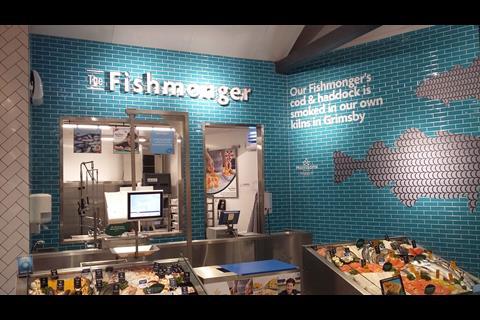 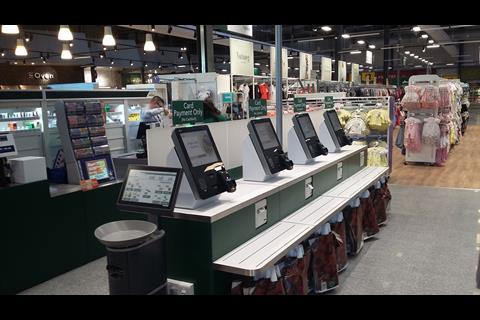 The UK’s fourth-largest grocer has opened a fresh-looking store in Cambridgeshire’s St Ives that points to an optimistic new era.

Today Morrisons opened a small(er) store in St Ives – the one in Cambridgeshire, rather than the west Cornish outpost beloved of the fine-art community.

The store measures 25,000 sq ft, trades from a single floor and is on the edge of this small but busy community.

It is also something of a departure from Morrisons tradition with a long exterior that is a mix of wood, steel, glass and graduated tonal tiling.

“Justine Manley, retail environment design director, says the intention is to stamp Morrisons’ authority on its position as a ‘food maker’”

Even the logo is different, white with what looks like an abstract ear of corn surrounding the dot above the “i” in the retailer’s name.

Step inside and the view is almost as different as the exterior would lead you to expect. Very low equipment heights, and a ‘Market Street’ that is not a series of flat-fronted counters along the perimeter, take this interior more towards the sense of some kind of food hall or market.

Justine Manley, retail environment design director, says the intention is to stamp Morrisons’ authority on its position as a “food maker”. 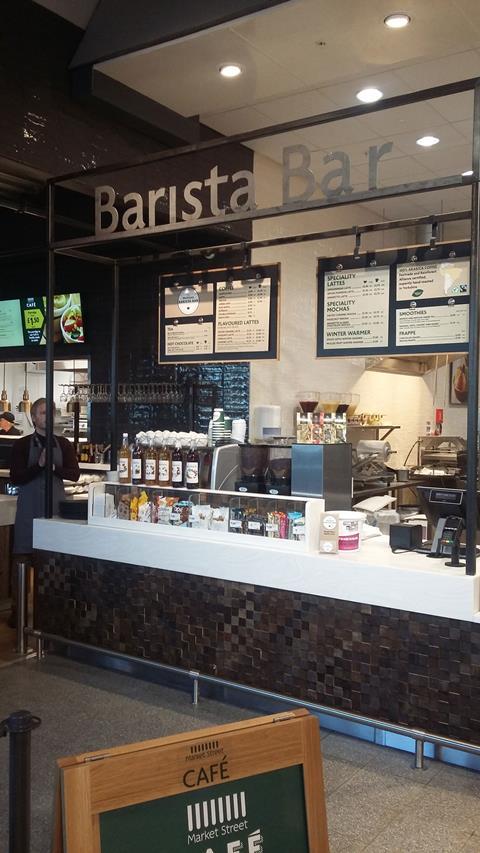 This means that the appearance of the perimeter, along which this version of the Market Street formula has been arranged, exudes more the sense of a series of food preparation stations, rather than the normal serviced counters you might expect.

The names above each of these are fairly standard: ‘The Oven’, ‘The Delicatessen’, ‘The Butcher’ and ‘The Fishmonger’. Each has been given its own appearance using different coloured tiling treatments.

And rather than having a flat wall with the different parts of the market running its length, in St Ives each ‘department’ juts out from the wall into the store proper, giving the perimeter an interesting sawtooth appearance.

To all of this can be added a café at the front of the store, a Baker & Cake Shop, and a raw steel-framed counter that is home to the Barista Bar.

Worth noting too is the kiosk in the café, using which shoppers can order a meal, pay and then sit down and wait for the food to appear.

The café has waiters to take the pain out of the usual supermarket restaurant process of queueing up and then heading for a table while bearing a heavy tray.

All of which means the whole of the left-hand side of the shop is related, but somewhat distantly to what the Morrisons shopper might anticipate when entering one of its stores.

The area immediately to the right of Market Street is the store’s ‘fresh’ area, and here the fruit and veg is displayed on low wood-clad gondolas that afford views deep into the interior.

The same but different

Much of the rest of the store is a refreshed iteration of the supermarket norm.

But Manley is quick to point out the differences with ‘Free From’, ‘Health and Wellbeing’ and ‘Home Baking’, for example, all being examples of a category-led approach to product display, which does help with the business of menu planning and finding what is needed more easily.

The aisles themselves have a lot of shelf-edge promotional wobblers, which offer details of products that have been made and sourced locally.

“As a whole, the store is perhaps the shape of things to come, with something similar under way at the shop in Abergavenny in South Wales”

Manley says that in the majority of supermarkets the figure for this is around the 40 mark, but in this store 220 of the products are from local suppliers.

Heading to the pinch point – the checkouts – Morrisons has opted to use tills that can deal with two shoppers’ purchases at the same time, courtesy of manufacturer Itab with software from NCR.

The tills work by separating off the first customer’s shopping at the end of the conveyor belt when they have finished shopping, meaning that the next customer can be attended to earlier.

Perhaps the most obvious thing about these tills, though, is their height. Rather than surrounding the checkout colleague with a metal fortress, the whole appearance is lower and less encumbered, meaning that the tills may still be a barrier, but they feel less so. There is also a bank of ‘card only’ checkouts, a feature that was trialled in Bradford last year. 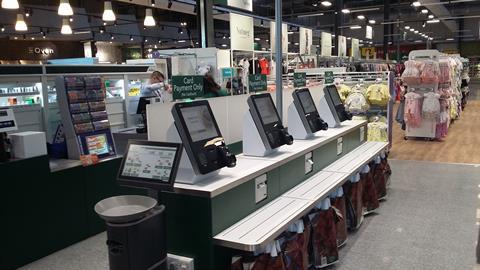 Some of the checkouts

As a whole, the store is perhaps the shape of things to come, with something similar under way at the shop in Abergavenny in South Wales.

The interior was overwhelmingly the work of the Morrisons design team, and the store has been awarded Secure by Design status by Cambridgeshire Police, meaning it is a safer environment for staff and shoppers as far as crime is concerned.

It has to be hoped that all of this works well for Morrisons. In the still relatively brave new Morrisons world under the watchful eye of chief executive Dave Potts, this one looks a winner – and, if you are in the area, is worth a visit.