Mixing it up: How Hotel Chocolat and Joules are diversifying to drive growth

Diversification is a growing trend for retailers, from new product categories to new store formats and other customer propositions. But can adding more strings to your bow offer a route to long-term growth?

History is littered with examples of businesses that have expanded beyond their core proposition to huge success.

In Amazon, which started life as an online marketplace for books before becoming the sprawling commercial giant we know today, retail might just boast the greatest diversification success story of them all. 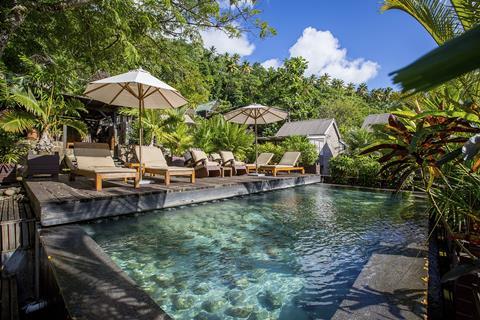 These lessons have not been lost on other retailers looking to grow their own sales and profits at a time when every penny of consumer spend is fiercely contested. In recent years, retail diversification has been picking up steam.

Fashion giants H&M and Zara have launched standalone homeware formats. Next and Missguided have developed their own beauty propositions. Poundland has brought its Pep & Co fashion brand into Poundland stores and more recently extended into chilled and frozen groceries.

But diversification is far from a fail-safe pathway to growth. For evidence, look no further than Virgin’s ill-fated foray into bridalwear or Easyjet’s short-lived move into cinemas.

Recent retail history is similarly replete with examples of unsuccessful ventures. Tesco’s acquisition spree during the Philip Clarke era, which saw businesses such as Blinkbox, Giraffe and Euphorium Bakery bought and then quickly dumped once Dave Lewis took the helm, is perhaps the most infamous example.

So can diversification into new product categories, store formats and other customer propositions offer a route to long-term growth? And, if so, how can retailers do it well while avoiding the common pitfalls?

Poundland is one retailer that has successfully diversified beyond the narrow range of fixed-price-point items that gave the business its name.

Back in 2016, it started trialling Pep & Co products in Poundland stores in a bid to enhance its fashion offer.

Five years later and Pep & Co shop-in-shops are now in 350 stores with the brand recently extended into homewares.

“Customers always say they love Poundland and what we do; they just wish they could get more in terms of breadth of category and within each category”

The launch of a chilled and frozen grocery offer and the recent widening of its price points is the latest attempt to broaden market coverage and tap into new revenue streams. 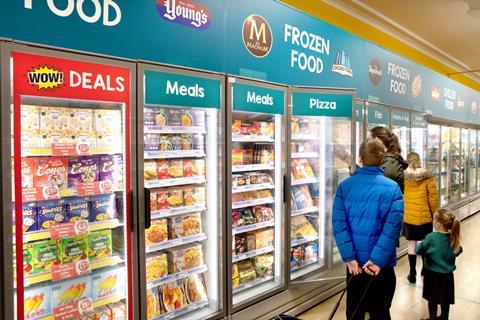 Poundland has recently launched a chilled and frozen grocery offer

“Customers always say they love Poundland and what we do; they just wish they could get more in terms of breadth of category and within each category. That’s what we’ve been doing really, building on the foundation,” says Poundland commercial director Tim Bettley.

Poundland’s diversification can be considered cautious compared with that of Hotel Chocolat. Its dizzying list of brand extensions encompasses cafes, restaurants, a boutique hotel and a school of chocolate, as well as category extensions, in-store customer experiences and new store formats.

Co-founder and chief executive Angus Thirlwell says the purchase of its own cocoa farm in Saint Lucia was a pivotal moment in the brand’s development that “laid the track ahead of us for all the category and product innovations we have made”.

Thirlwell suggests that Hotel Chocolat’s connection to its raw material – the cocoa bean – gives it an authenticity when diversifying into new areas that retailers without the same connection to source might lack.

“It is the foundation stone of our credibility and the permission that our customers give us to do things like cocoa-infused gin,” he says.

“If another chocolate company that had no exposure or commitment to growing cocoa tried to do that it would just seem like a stupid novelty, but because we are very close to the cocoa we have permission to do this sort of thing.”

Every new venture has to be sustainable economically, according to Thirlwell, but that doesn’t mean it has to deliver a huge financial return to be seen as adding value.

“There are degrees of scale,” he explains. “It might be that something small is contributing in a large way to the brand.”

Thirlwell gives the example of Hotel Chocolat’s luxury hotel in Saint Lucia. “It’s a very boutique hotel [it has just 14 rooms]. You’re literally in the middle or our cocoa farm. It’s a small business, but the value of that to our brand is priceless.”

“H&M launched a shop focused on conscious consumers. They’re not looking for massive amounts of footfall and profit there; they want their customers to understand their values”

Gensler global retail lead Lara Marrero agrees that financial KPIs are not always the prime measure by which retailers judge the success of diversification, noting that some brands are diversifying for purpose rather than profit.

“H&M just launched a shop that is focused on conscious consumers,” she notes.

“They’re not looking for massive amounts of footfall and profit there; they want their customers to understand their values, and for those that are aligned they want to give them a place where they belong and feel part of a community.”

For Poundland, sales and profits are the key drivers of its category extensions, according to Bettley, but they are also a response to a desire among customers to do more of a full shop with the retailer.

“It’s giving our customers more when they come to see us, so it will be driving average transaction value but also their frequency of visit,” he says.

For the rollout of its chilled and frozen range, Poundland partnered with Fultons Foods, a Yorkshire-based frozen-food retailer, which helped develop the range and build a distribution network to serve stores.

Bettley says the rationale was to work with a partner to develop a proposition in an area where Poundand itself did not have in-house expertise.

He says the business will potentially look to do something similar if it chooses to enter other new and complex categories, such as beers, wines and spirits, although he says that “ultimately you want to bring most of it in-house to have the control”.

This explains why Poundland acquired Fultons in October as part of a plan to bring its chilled and frozen offer to as many as 500 stores over the next two years. 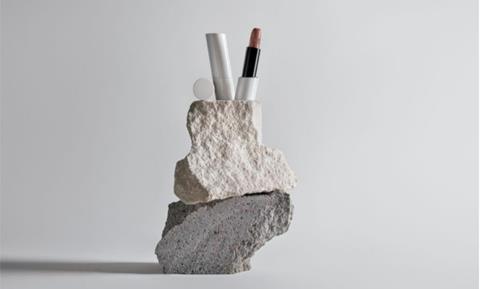 Zara launched its own beauty brand this week

Making the right decision over when to develop a new proposition in-house and when to acquire or partner with a third party is key to successful diversification.

Developing a beauty offer, for example, is a natural extension for many fashion brands, most recently Zara – particularly those that appeal to younger shoppers.

But Retail Remedy managing partner Phil Dorrell warns that retailers often get the execution wrong “because they haven’t put the right resources behind it, they’ve not bought correctly, they’ve not logistically supplied it correctly and stores haven’t handled it very well” – all of which means it can be little more than “a bit of a profit loss”.

Dorrell suggests that collaborating with a third party, for instance by bringing in a branded concession, often makes more sense “because it takes all the pain points away” for the host retailer.

Acquisitions, by contrast, can be “dangerous” because the retailer doing the acquiring takes on all the risk.

How not to diversify: lessons from Tesco

Tesco’s rapid diversification under the leadership of Philip Clarke (and towards the end of the Terry Leahy era) is an object lesson in what can happen when a business deviates too far from its core.

In the period between 2011 and 2013, Tesco acquired or took a significant shareholding in streaming service Blinkbox, restaurant business Giraffe, coffee shop chain Harris + Hoole and Euphorium Bakery, having already invested in Dobbies back in 2008.

“The truth of the matter is that a lot of those were individual passions, rather than complementary offers that were dealing with either Tesco pain points or a customer need”

By the time Clarke’s successor Dave Lewis announced his departure last year, all of the businesses had been disposed of, along with Tesco’s loss-making Tesco Direct general merchandise website.

Dorrell believes a lack of strategic thinking was behind the failure of Tesco’s diversification: “The truth of the matter is that a lot of those were individual passions, rather than complementary offers that were dealing with either Tesco pain points or a customer need.” 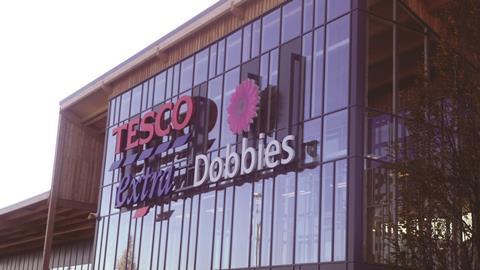 Dorrell suggests the acquisitions will also have created confusion among Tesco’s own leadership team.

“If you’re building a rugby team you’ve got forwards and backs,” he says. “Philip Clarke already had a rugby team on the pitch and he kept putting more backs and forwards on, so the current players start thinking: ‘What are these guys doing? Do I compete with them? Do I play with them?’ They didn’t really know.”

For an acquisition to be successful, Dorrell says it needs to be strategically right for the business and the way your customers behave now or will in the near future. He cites the development of Tesco Mobile as an example of the retailer being ahead of the game.

“If those two aren’t mutually beneficial, it becomes a bit of a hostile takeover and, frankly, that’s not good for anyone.”

“We’ve got a strong overlap in customers in terms of lifestyle and we know it well through Friends of Joules [the retailer’s third-party marketplace],” says Jones, adding that Garden Trading has been a “really successful seller” over the past year.

The business will continue to be run as a standalone brand, but by bringing it into the Joules family Jones says it gets a strong level of product development and sourcing experience in the home and outdoor areas.

Where diversification is carefully considered, well executed and complementary to the core brand proposition, it can be an attractive pathway to growth. But businesses must be wary of over-stretching themselves.

“It becomes a question of relentlessly prioritising. The art of that is really hard: it’s my biggest challenge and biggest angst”

“If you over-diversify you spread the butter a bit thin on the bread, and it suddenly becomes a question of whether you have enough core talent within your business to be able to work across all these different streams,” says Dorrell.

“Quite often, [retailers] haven’t and they overreach themselves.”

Thirlwell says Hotel Chocolat always has more ideas than it has bandwidth to deliver. “That’s where the difficult stuff starts and it becomes a question of relentlessly prioritising. The art of that is really hard: it’s my biggest challenge and biggest angst.”

Hotel Chocolat has largely got it right so far. But retailers who think diversification is a licence to print money should think twice before taking the plunge.

How can retailers leverage and adapt their existing stores to meet new consumer demand while remaining profitable? What role will shops play in the overall retail mix and what are the KPIs that will really count? And what will the store of the future look like?

Each of our morning masterclasses – taking place on Tuesday, May 18, and Thursday, May 20 – will include two panel discussions and a fireside chat with top retailers and brands from the UK and overseas.