The Broadway shopping centre has opened today adding 570,000 sq ft of retail space to Bradford including the first department store in 20 years.

The development has attracted a number of new retail names to Bradford including H&M – which had topped a list of most-wanted brands by residents – as well as Superdry, Accessorize and Paperchase. 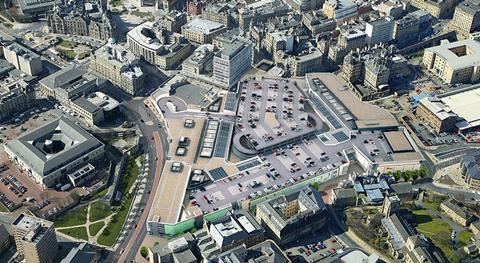 The scheme has opened its doors after an extended delay to the project which first began 11 years ago but was mothballed by Westfield in 2008. In 2012 the scheme was revived after Meyer Bergman stepped in with backing from two large Canadian funds. Construction work started on a revised scheme in January 2014.

Westfield has continued to lead on the design and leasing of The Broadway and is responsible for managing the centre now that it is complete.

Westfield UK & Europe chief operating officer Peter Miller said: “This development will bring huge regeneration to the city centre in the form of increased footfall and retail sales to the benefit of local businesses, additional jobs, as well as acting as a catalyst for further inward investment which is already matching The Broadway’s”.

Location analyst CACI has estimated that the completion of the scheme could boost the total catchment spend in and around Bradford by 78% and propel the city from 85th to 26th in the UK retail rankings.