The Government has shunned calls to force shops to close on Boxing Day despite backing from senior MPs. 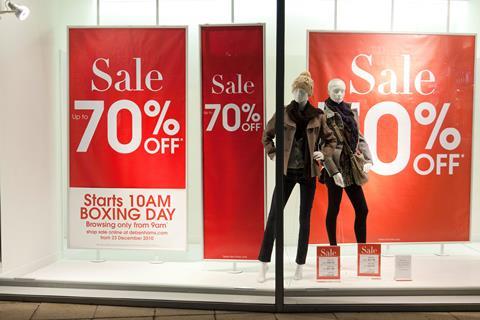 The issue will be debated in Parliament today after a petition lobbying for a ban on all retailers opening on December 26 gained more than 140,000 signatures.

Those who signed the petition online suggested that shops which open on Boxing Day exploit lower-paid workers.

Almost 6,000 comments were submitted to the Petition Committee’s online forum – most of which backed store closures.

But the British Retail Consortium has insisted that the day after Christmas remains a popular shopping day for consumers across the UK.

British shoppers spent £3.74bn in the Boxing Day sales last year, according to research from VoucherCodes.co.uk and the Centre for Retail Research – a 6% jump on 2014 spending.

The government said in a statement: “We do not believe it is for central Government to tell businesses how to run their shops or how best to serve their customers.

“Therefore we are not proposing to ban shops from opening on Boxing Day.”

However, Labour MP and chair of the Petitions Committee Helen Jones, who will lead today’s debate, said Boxing Day sales exploit low-paid workers and deprives them of time with their families.

Jones said: “I went from feeling quite indifferent about Boxing Day openings to believing it does exploit very low-paid workers, who often have to work late on Christmas Eve to get the shops ready and then have to go in very early on Boxing Day morning.”

She added: “What I’ve not seen is anything to convince me that Boxing Day generates extra trade, as opposed to just moving it from another day.

“No one died because a shop was shut, and I think we are exercising our freedom to shop whenever we want on the backs of some very low-paid workers, who are being exploited and being denied the freedom to expect to have the time with their families.”

A British Retail Consortium spokeswoman said: “Individual retailers and employers in other sectors such as hospitality will make their own decisions on holiday staffing based on their customers’ needs and preferences.

“Boxing Day has for years been a popular shopping day as customers take advantage of the Christmas sales, and retailers will respond accordingly to cater for customer demand.

“Most retailers offer flexible shift patterns to ensure time off is distributed fairly among those who don’t wish to work throughout the holiday period.”

According to a House of Commons Library report, 365,000 people in the British retail industry worked on Boxing Day in 2014.