Pets at Home’s new Whiskers ‘n Paws format is “potentially important”, according to its boss, as it eyes a bigger presence on high streets. 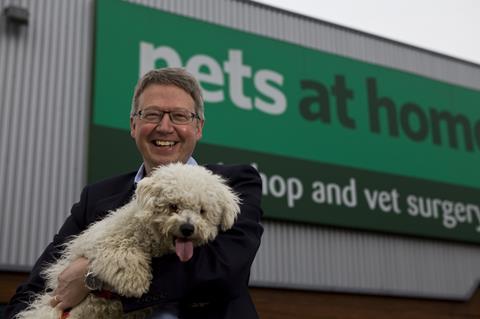 The store’s core offer is food and accessories for dogs and cats and includes a groom room, but has no live pets.

“Whiskers ‘n Paws is trying to be within 10 minutes of customers where we can’t get a retail park format,” Pets at Home chief executive Nick Wood told Retail Week.

“It’s about trying to drive convenience to those customers that otherwise we would just be neglecting.”

He added: “Inside the M25, (Whiskers ‘n Paws) is a potentially important development for us.” However he stressed it will “remain in trial”.

Wood also rejected the suggestion the launch is a response to the grocers’ pet food offer.

“The grocers are significantly more convenient,” he said. “That’s their core competitive edge. What we know if we can be within a 10-minute drive of our customers we do really well.”

Four have opened so far – in Ilkley, Marlow, Wilmslow and Sevenoaks – with a fifth planned by the end of March.

Woods said the Barkers format remains an “extended trial”. He added: “We’ve made no decision on core roll-out.”

On testing new formats, he said: “One of things we learnt from the US is you have to continually re-invent yourself with formats. Just sitting there with a big box format will get us to 500 stores, which is great.

“But what about all the opportunities you can’t get to with a big box format?”