Troubled fashion etailer My-Wardrobe has stopped trading and has sold its domain name to Net-a-Porter for an undisclosed sum. 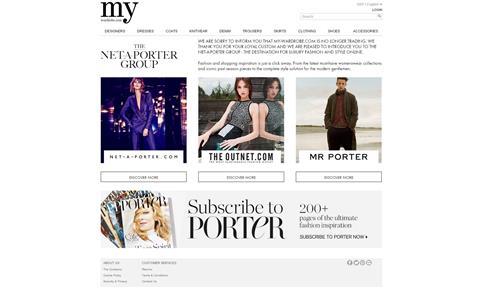 The retailer, which has been running discounts as high as 70% across all of its stock in the last few weeks, has put on a statement on its website informing all of its customers that it is no longer trading and links to the Net-a-Porter’s portfolio of websites including Net-a-Porter, The Outnet and Mr Porter.

A source close to the situation told Retail Week that Net-a-Porter had bought My-Wardrobe’s domain name but the deal does not include any assets.

All remaining staff – thought to be around five – will leave in the next few weeks.

The source said My-Wardrobe would still honour returns for the next few weeks.

The retailer will continue to trade from its store in Whiteleys shopping centre in Bayswater, London. It is unclear when it intends to close the store, which only opened in the summer.

My-Wardrobe has had a turbulent time in recent years in the face of competition from the likes of Net-a-Porter. In September it said it was “reviewing its options” after the business stopped buying for spring 15.

The retailer entered administration in November last year but was bought the same month in a pre-pack deal.