Netflix to launch in UK next year

Netflix, the on-demand film specialist, is to launch a streaming service in the UK and Republic of Ireland in 2012. 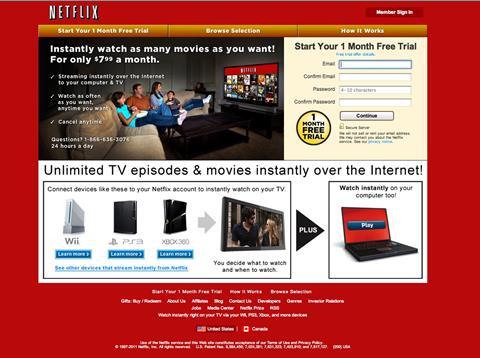 The debut is likely to up the ante in film retail, pitching US group Netflix against Amazon-owned Lovefilm – which also streams films – and DVD rental business Blockbuster.

Netflix will operate a subscription model in this country and offer TV shows as well as films. More details, such as pricing, are expected to be revealed in the run-up to launch.

Netflix, which also sells in Canada as well as the US, is thought to be eyeing other European markets and will compete against broadcasters, which are increasingly offering streaming, as well as retailers. Grocers are also building streaming capability. Sainsbury’s bought an online entertainment business earlier this month and Tesco is pushing into the market.

Nasdaq-listed Netflix was founded in 1997 and has a total of 25m subscribers.