Maplin has hailed “one of its strongest Christmas trading periods” as drones helped sales fly during the golden quarter. 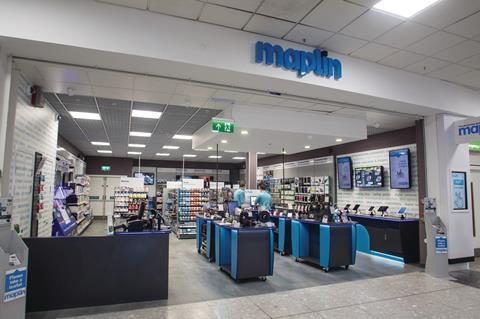 Maplin posted a 4.4% rise in like-for-likes in the six weeks to December 24

The technology retailer posted a 4.4% jump in like-for-like sales in the six weeks to December 24, driven by the success of its ecommerce platform.

Bricks-and-mortar sales climbed 1.4% on a like-for-like basis across its 217-strong estate.

Maplin said it achieved sales growth “over a number of categories”, with drones, Google’s Chromecast and the Amazon Fire Stick all proving popular with customers during the festive season.

The retailer said it sold more than 25,000 drones during the six-week period, from its entry level ‘quadcopters’ at £30, to professional drones, which it sells for more than £2,000.

Maplin said sales in Smart Home tech more than doubled during the period, while it also proved a popular destination for “everyday products”, selling almost 350,000 batteries ahead of Christmas Day.

Maplin chief executive Oliver Meakin said: “Christmas 2016 has been one of our most successful trading periods and highlights the significant investment we have made across our whole business in the last two years.

“As we accelerate investment in digital, our people and stores into 2017 we expect to see sales continue to grow, as well as develop other initiatives including the roll-out of a new store format and refreshed branding across the estate, which was first trialled at Cambridge Beehive in November 2016.”

The electricals retailer boss also told Retail Week that the busines would be increasing its prices in 2017 as a result of Brexit.

“Pretty much everything we buy is dollar denominated, so our costs have gone up 15%” said Meakin.

”Inflation in tech will be between 4-6% by September of this year - we have to pass some of that 15% increase through to the consumer and see what it does to sales volumes.”