Data: John Lewis on how we shop, live and look

From the Olympics to Brexit, onesies to unicorns and courgetti to all things fermented, a lot can change in five years. 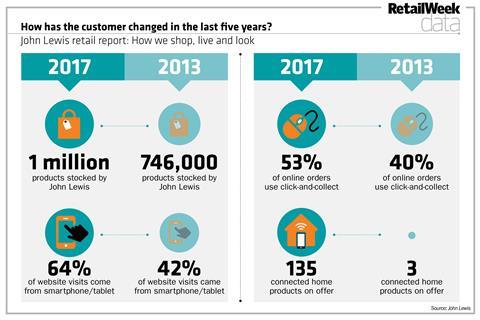 Back in 2013, John Lewis began looking at how the nation shops, lives and looks in its annual retail report.

Consumer behaviour is an immediate indicator of a nation’s mindset and this year, while it’s clear that the hangover of the recession that was still present in 2013 is behind us, consumer behaviour is beginning to shift fundamentally once again as we enter a new age of political and economic uncertainty.

With socioeconomic anxiety beginning to bite once more, John Lewis points to the resurgence of the lipstick effect – shoppers treating themselves to affordable pick-me-ups – and limiting larger purchases to well-thought-out investment buys.

This need for a quick boost didn’t stop at the beauty counter, however. 2017 was also the year of the kitsch inflatable as tropical standbys such as flamingos, watermelons and pineapples took centre stage: the search term ‘inflatable’ shot up 99% on johnlewis.com while ‘unicorn’ rose 70% and ‘mermaid’ climbed 22%.

Many of those searching for exotic inflatables would have been millennials, whose impact is being felt more keenly than ever.

The current vogue for experiential shopping, especially popular with the embattled department store sector, is partly driven by the generation, who are seen to value experience over material goods more than their predecessors.

John Lewis found that millennials were twice as likely to get a beauty treatment or use their phones to research products while shopping and three times as likely to combine shopping with another leisure activity.

Our homes are becoming ever more important, with consumers just as likely to Instagram a new sofa as a new outfit.

“As consumers stay health conscious while trying to tighten their belts, sales of lunch boxes, thermal mugs and water bottles all shot up”

Velvet and millennial pink were key interiors trends, with sales of bed linen in the colour of the year rising 28%. At a higher price bracket, John Lewis connected home sales shot up 160% with connected ovens, fridges, washing machines and even blinds now controllable from smartphones.

Elsewhere on the technology front, sales of wireless and hidden technology rose as wireless headphones and computer accessories shot up 250% and 43% and products such as Dyson’s cordless vacuums and Sonos speakers designed to be hidden featured high on customers’ wish lists.

And as consumers stay health conscious while trying to tighten their belts, sales of lunch boxes, thermal mugs and water bottles all shot up, rising 80%, 15% and 50% respectively.

Millennial pink of course had an impact on clothing this year with its popularity peaking in June – men’s pink t-shirt sales shot up 74% while pink women’s jackets were up 55%.

In beauty, the lipstick effect led to a 35% rise in luxury fragrances while sheet masks went mainstream as plane-bound celebrities and models began tweeting their #sheetmaskselfies.

Key stats from the report