Analysis: The Entertainer sets it sights on overseas growth

The Entertainer’s prospective move into international markets could be a game-changer for a retailer that has made delivering growth in a difficult category look like child’s play. 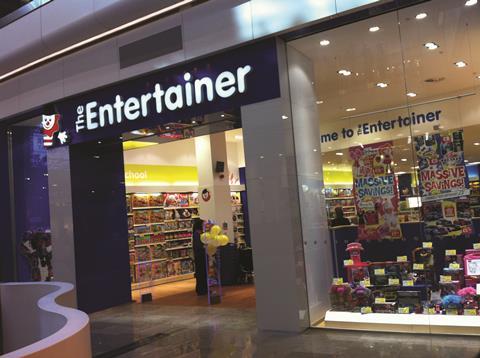 The toy specialist is considering opening franchise stores in central Europe and the Middle East after numerous approaches.

The initiative is not a surprise because the retailer has put a real focus on expansion lately.

In the year to January 28, The Entertainer opened 10 new stores, while 15 are slated for the current financial year – three more than originally planned after the retailer delivered better than expected like-for-like sales, up 12.3% in the 28 weeks to August 11. The store estate should reach 81 by the end of January, and it is the largest independent toy retailer in the UK.

Robust performance has been achieved against what the retailer admits has been a tough few years, because of the economic conditions and the sector becoming increasingly competitive. Supermarkets have made in-roads into the market and their ability to buy in bulk and drive large volumes have led to sharp prices.

However, The Entertainer, which was set up by Gary and Catherine Grant in 1981 when they bought a toy shop in Amersham, has held its own, fighting off pressure from toy giant Toys R Us as well as Argos and the grocers. Toys R Us’ pre-tax profit plunged 48% in the year to January 29, in contrast to The Entertainer which experienced a 24.2% surge to £1.3m.

The Entertainer is still family run – managing director Gary Grant’s sons Duncan and Stuart are directors at the firm.

The retailer offers a traditional high street toy specialist store while offering competitive deals such as Bogofs. The Entertainer moved up a notch after Woolworths collapsed at the end of 2008, affording it the opportunity to take more of the toy market gap left. In 2009/10 The Entertainer achieved 16% like-for-like growth.

To maximise this opportunity, it has been opening more stores and has doubled its portfolio over the past five years.

The administration of Hawkin’s Bazaar earlier this year and dwindling Early Learning Centre stores, as owner Mothercare opted for a shop-in-shop format for the brand, have also strengthened The Entertainer’s position and helped it gain market share.

The Entertainer has been opening in prime locations including Westfield Stratford City and Westfield London, updating its fascia across its estate and improving the in-store environment to create more theatre for customers.

In 2010 the retailer also gave up The Gadget Shop licence to WHSmith to focus on toy retailing. It had acquired the gadget retailer’s trading name from administrators in June 2005.

Online has been a key part of The Entertainer’s proposition. The retailer was an early adopter, launching an ecommerce site in 1999 under the domain Thetoyshop.com rather than The Entertainer brand name.

The Entertainer has continued to invest in digital and in 2006/07 it revealed that its online business generated more revenue than any of the individual stores.

This year it invested £1.5m in a new platform, enabling the retailer to launch a much faster and more convenient 30-minute click-and-collect service against the three-day wait customers had before.

The Entertainer rarely breaks down online sales but Retail Week Knowledge Bank estimates for the last financial year that etail comprised 15% of overall sales, generating between £12m and £14m.

The retailer has shown that it does not toy around in seizing growth opportunities and international could be its next big win.

In the meantime, it is looking forward to its busiest period with some confidence. With shrewd offers and a growing store portfolio, The Entertainer is set to take centre stage this Christmas.