Time to tap into the 4.7 million gig economy?

UK retail is experiencing a recruitment crisis, but the flexible workforce revolution presents a potential panacea for frontline staffing.

In Shopping for Retail’s Front Line, a new interactive guide produced in association with Catapult, Retail Week explores how embracing the UK’s burgeoning gig economy – which now accounts for 4.7 million workers – could stand to benefit retailers.

Forty per cent of retailers found it difficult to retain staff over the past year, according to research from the Chartered Institute of Personnel and Development – 11% higher than for businesses outside the sector.

Alongside the recruitment and training costs associated with high staff turnover, and a loss of revenue due to gaps in staffing, the CIPD Labour Market Outlook Summer 2019 report also found that 36% of retailers have been forced to increase salaries to support staff retention.

The shared workforce presents a potential solution for retailers to combat staff churn.

Shopping for Retail’s Front Line also addresses the challenges behind the gig economy and covers the subject that has arguably garnered it the most column inches: zero-hours contracts.

A snapshot into the UK gig economy

But does it improve workers’ lives or worsen them?

On the flip side, the government research revealed that 25% of gig economy participants were either very or fairly dissatisfied with their work-related benefits and level of income, while 23% were dissatisfied with career development and training opportunities.

So, what does all this mean for retailers? Should retailers weigh up the challenges and look to embrace this revolution in how people work?

Find out in Shopping for Retail’s Front Line. 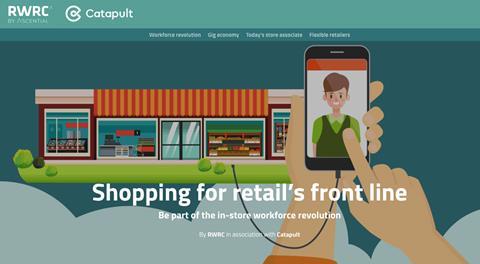